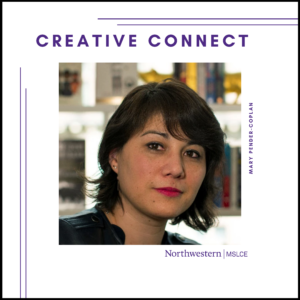 Leading global talent and entertainment company UTA represents many of the most acclaimed figures across film, television, news, music, sports, speakers, theater, fine art, literature, video games, podcasts and other social and digital content. A passionate advocate for artists, creators and innovators, the company also is recognized in the areas of film finance and packaging, branding, licensing and endorsements.

Mary Pender currently works as an agent in the Media Rights department.

“I work to identify voices that I think are going to be influential in the book space or as journalists, as podcasters or even someone who has an interesting life story which might be an interesting source material for a film or TV,” Pender explained.

While a part of her job is talent identification, a majority of her work revolves around strategically building her client’s platform. She is responsible for brainstorming ways in which she can help them advance their careers further and identify projects that could help them get where they eventually want to be in the future.

When elaborating about the skills required to be an impactful talent agent, Pender believes that curiosity is the biggest asset anyone can bring to a talent agency’s table. “We’re trying to build a career, but not every career is the same, not every client is the same, and not every piece of material is the same. While the general process​ looks similar, it’s not exactly the alike [for everyone]. You have to have a curiosity and understand that no question is a dumb question,” she explains.

Most agents start off their careers in the mailroom and eventually work their way up to an agent’s desk, then agent assistant, and eventually take on their own clients. Pender’s path to UTA, however, illustrates there are more ways to enter the industry.  Pender’s journey really started in middle school when she decided she was going to be a political journalist. From there she went to UC Berkeley for her undergraduate degree. Upon graduation, Pender moved to Washington DC to work at the McNeil/Lehrer NewsHour as a Desk Assistant. During that time, she met Kwame Holman, the Congressional Correspondent for the NewsHour, who proved to be extremely crucial to the decisions she took in the formative years of her career. “Kwame Holman was the only person at the NewsHour who had gone to Medill and he told me that if I actually wanted to be an on-air journalist then I really should go to a school where I was going to get the boots on the ground kind of an education and walk out of the school with a resume tape,” she explained.

Acting upon his advice she applied and was accepted to the Medill’s Master’s in Journalism program to further her career in the industry. However, her professional journey took an unexpected turn after she realized that journalism wasn’t her true calling. She left her job at KGO Radio News to join a dot com company where she was unexpectedly laid off during the economic downturn after 9/11. After a stint at the William Morris Agency and several parttime writing gigs, she eventually transitioning to scouting for international publishers and film/TV at Maria B. Campbell Associates. In 2015 she joined UTA and now Pender believes she has finally found her calling. She loves discovering new voices and finding the right fit for her clients.