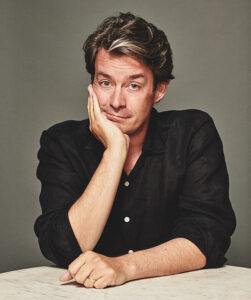 From drawing and singing to writing and performing music, Adjunct Professor PJ Loughran developed an early love for the creative arts.

“All I wanted to do was find a way to have a life doing those things,” he says. “I was fortunate to come from a family that didn’t dissuade me. My parents saw what I was interested in, and they supported it. And, most importantly, no one ever warned me that it could be difficult.”

After graduating from New York’s Parsons School of Design with an illustration degree, he struggled to pick a career path: music or art? He had always been interested in both, and very much wanted to pursue both … so he did. Loughran landed a regular column illustrating for The Village Voice and began performing his songs in New York City nightclubs as he worked toward becoming a published illustrator and performing artist.

To pay the bills, he also took a full-time job at interactive agency pioneer AGENCY.COM, where he worked on accounts like British Airways, Coca-Cola, and Nike. Every morning, he got up early to draw; in the evenings, he played open mics and club gigs around the city.

Although agency work was never part of a plan, he found the work surprisingly interesting and stimulating. During his nearly four years there, he uncovered a deep appreciation for brand creation and development, as well as an interest in business. “I never took any real interest in entrepreneurship until that point,” he explains, “but the idea of creating something around a larger purpose or vision became fascinating to me.”

Although he enjoyed the work, Loughran was eager to live the life of an artist. His illustration side hustle had built momentum, landing him gigs at magazines like Esquire and Sports Illustrated, so he gave his notice—six months before the tech bubble burst. “There’s never been a well-thought-out blueprint I’ve followed,” he explains. “I’ve typically tried to follow my gut, and it has led me toward some very interesting, fulfilling experiences.”

From there, he became a full-time freelance illustrator and played club dates as a singer/songwriter. By 2004, he was writing songs, recording, touring with his own band, and opening nationwide for groups like Maroon 5 and R.E.M. As idyllic as this life seemed, however, Loughran felt like something was lacking. He missed being involved in business.

To fill the void, he started his own full-service creative agency in New York to do work for Hollywood Studios like 20th Century Fox and Warner Bros, as well as brands like LEGO, Domino’s, Acuvue, and Visa. After about five years, he was presented with an offer to sell. Two years later, he started another company that he also sold—this time to festival pioneer Superfly, best known as the creator of Bonnaroo, where he served as executive creative director and one of two operating presidents in the company.

In 2019, Loughran got the itch to launch yet another new venture, so he started EMÁJYN, a company focused on VIP signature events and entertainment strategy. (He’s currently in the process of building two additional businesses as well, including another creative agency and a beverage product.)

To share what he was learning throughout these endeavors, he often visited previous Adjunct Lecturer Gregg Latterman’s Entrepreneurship in the Creative Industries class as a speaker and mentor for Northwestern’s MS in Leadership for Creative Enterprises program.

When Latterman decided to shift his attention back to the music business, Loughran was a natural fit to take over the class beginning in March 2021.

“If someone said to me, ‘What kind of course would you want to teach?’, it would be this,” says Loughran. “It’s exactly what I’m most passionate about: artists turning their interests into viable businesses.”

Although the curriculum and group projects will be similar to Latterman’s, Loughran says he’ll approach these topics from a different perspective. While Latterman had insight as a business professional who sought to build a business in the arts, Loughran reshaped the class to focus on artists becoming entrepreneurs.

“I think there’s an inherent fear that people in creative spaces have around struggling to make money or that these pursuits are out of reach,” he explains. “A lot of those fears are put in place by parents, peers, or society at large. I hope students come away from this class with a feeling of possibility. It is possible. If you can dream it, and if you’re willing to work hard, then so much is possible. We’re fortunate to live in a day and technological age where it’s easier to start a business than ever before. You spend so much of your life working … I believe it’s incredibly important to enjoy those hours and make the most of them.”