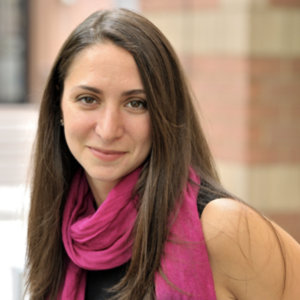 When Allyson Gimbel ’21 was an undergraduate at Tufts University, she already had a vision of life after college: She wanted writing and storytelling to be at the center of her career.

After graduation, she was ready to launch a career focused on educational and mission-minded media, so she joined the country’s largest PBS member station— New York’s WNET—as a research assistant to the president.

For nearly a decade, she took advantage of every opportunity that came her way, even if it meant she had to build new skills quickly. Working at a PBS station, Gimbel says staff members needed to wear several hats; it was the perfect place to gain experience. Eventually, she joined WNET’s local production unit as a producer and then senior producer.

In her role, she worked on a variety of broadcast and digital series, including an Emmy Award-winning program called Treasures of New York, which took viewers behind the scenes of iconic institutions, cultural organizations, and architecture. She also produced several other documentary programs, including one about medical advancements in the U.S. military, a theater program for court-involved youth, an avant-garde dance installation, and even a Grand Slam tennis tournament.

In 2018, after more than eight years of living in New York City, Gimbel was ready for a change. She missed her family in Chicago and wanted to return to her hometown.

When she told her boss she was leaving, he mentioned a meeting he had scheduled for the following week with the president of WTTW, Chicago’s PBS station—and invited Gimbel to attend. Shortly after, she landed a contract with WTTW to produce and direct Prehistoric Road Trip, a three-part series about paleontology in the American West.

“It was a life-changing experience,” says Gimbel. “But after it aired, I was ready to figure out my next move as a producer.”

She thought about continuing to build her own practice, but she also wondered what else was out there. Could she enhance her experiences with more education? In her research, she discovered Northwestern’s MS in Leadership for Creative Enterprises program. After attending an info session, she discovered a program that could help her build the skills she was looking for.

“I’m learning a lot about the structure behind how a media business operates and strategizes,” says Gimbel. “I was disconnected from that and knew nothing about it before. I’ve always been focused on the creation or output of products and not the big picture.” In her Business Models course, she has also been analyzing case studies to gain a 360-degree view of the business side of entertainment.

In the MSLCE program, Gimbel enjoys the self-awareness work she hasn’t had time to do before. “I never thought about the environments I thrive in, the soft skills I bring to the table, or my Myers-Briggs personality type,” she says.

Because her professional experience has primarily been centered around public media, Gimbel also finds value in hearing and learning from colleagues who work in other industries—from advertising producers to Netflix executives.

“I’m learning how to tell stories in ways that are not only objective but also promote engagement. I want to help my future employer reach audiences in a richer way. I’ve learned in Cultural Nonprofits that internal marketing teams can be so wrapped up in the way things are done that communicating their own stories can be difficult. I want to help change that!”