After earning a bachelor’s degree in photography, Wenli Liu ’17 decided to pursue a master’s program that would give her confidence to explore the business side of the film industry

Discovering Her Own Way in Film 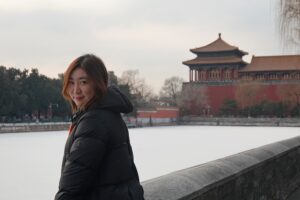 As she was growing up in China, photography and film always helped Wenli Liu ’17 feel connected to creative industries across the globe: Almost everyone can understand, interact with, and relate to these mediums.

That lifelong interest led her to earn a BFA in Photography, Art Administration, and Visual Communication at the School of the Art Institute of Chicago. When she returned to China each summer, she interned for a TV series, a video news agency, and The Walt Disney Company.

Although the undergraduate program she chose taught her a lot about practices and theories, Liu didn’t learn as much as she had hoped about successfully running an entertainment business, pitching ideas, or developing marketing strategies. She knew those were key components of leading creative people, projects, and teams, so she began looking for a graduate program to complement the skills she already had.

During her search, Liu discovered Northwestern’s MS in Leadership for Creative Enterprises. She knew the program might be a culture shock: “Most Chinese students get all their education right away and wait to work until after they get a graduate degree,” she explains. “It’s quite different than the Western approach, where people work for a while before a graduate program.”

Even though she didn’t have much work experience, Liu says she felt at home as soon as she began her classes. Learning from instructors who shared real-world work experiences helped her feel more confident about finding a job. “What they shared with us to prepare us for a career was really helpful, and I still use that information today—even advice on creating my portfolio and building my LinkedIn profile.”

For Liu, the program’s Business Models course offered valuable insight into core business strategies used in different creative industries—from theaters to museums.“That’s exactly what I wanted to learn more about: how they each managed and operated their business,” says Liu. “We did lots of site visits and got to talk to people who worked in those businesses every day.”

Digital Television was another course that resonated with Liu’s background and future career plans. As she learned how to pilot TV and video projects through the traditional network piloting process and independently, she also discovered how the internet and digital technologies offer new opportunities for creative professionals.

After graduation, Liu returned to China to kick off her career. “I was a little lost in the beginning because the local production companies are mostly commercial,” she describes. “People don’t support arthouse films here as much.”

After applying for opportunities at Fox and the Big Six movie studios, she heard back from The Walt Disney Company and landed a content creation internship in Shanghai. When her team was discussing the possibility of creating educational podcasts, she was able to refer back to the Marketing Strategies in Creative Industries course she took during the program and present helpful research she conducted as part of her final project.

“They were also focusing on how to localize ABC TV productions and choosing which titles fit the Chinese background better. It was a fun journey working for them,” she says. “It also helped me realize that I really wanted to do film and independent content.”

After her time at Disney, Liu joined the Beijing International Film Festival as an international project coordinator. “The festival was like a curation program for film screenings and gave me lots of ideas on how to provide a platform to present foreign films to a Chinese audience,” she explains.

In 2020, as movie theaters began to close due to COVID-19, Liu had a conversation with a friend about the future of the industry—and the two decided to partner on the creation of their own independent film. Liu joined the crew as the onsite producer, managing logistics and assisting the director, as well as coordinating transportation and scheduling.

Once the project was complete, she began her own freelance career as an independent film/festival program producer. So far, she has served as an art curator for the World Wildlife Fund Campaign, assisted with an XR exhibit at Goethe-Institut China, and acts as a project lead for China Media Management.

“I now have the confidence and experience to explore different sides of the film industry to see how I fit, which is what I had hoped to do,” she says. “It’s been a fun few years for me!”