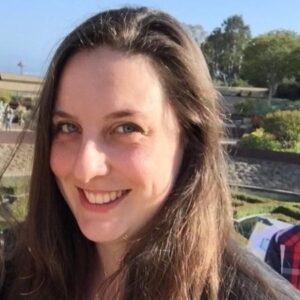 For Zoe Skehan ’17, art has always been part of learning—and something she loves.

Although this enthusiasm for all things creative made it difficult to choose a major, she decided to attend the University of Redlands to study art history and visual media studies—a combination to bring her passions into focus.

Earning her bachelor’s degree during a recession, she felt lucky to land a manager position at an art gallery that showcased work by Chicago and Evanston, IL-based artists. After six months, however, she was ready for something different: She wanted to see first-hand some of the work she spent so much time learning about in her art and media courses.

“I wanted to travel, but I also wanted to make money so I could pay off loans and not have a large career gap in my résumé,” Skehan explains. That desire led her to become a flight attendant for domestic and international flights on Spirit Airlines.

The job fulfilled her desire to see the world while earning an income, but she missed art and education—so she explored graduate programs that would allow her to continue to work. “I was looking for a degree that would help me pivot back into the media landscape, and the MS in Leadership for Creative Enterprises program was perfect. It’s really easy to get pigeon-holed into something, especially when you get a graduate degree,” she explains, “and I knew this program wouldn’t let that happen.”

She says the coursework helped paint a clear picture of the industry opportunities available. “The course on entertainment law grounded everything for me, and I really understood what I would be capable of doing.” An entrepreneurship class also helped her build translatable skills like creating business plans and marketing strategies.

“I’ve actually used the business plans I created in class a few times to help freelancers I know launch their businesses,” she explains. “I’ve also dabbled with the idea of starting my own business one day. If I do, this will be a super helpful tool. I now have confidence in knowing that, if this is something I want to do down the road, then I have the skills to do it.”

After graduation, her master’s degree led her to a Corrado Mooncoin internship that she credits for launching her media career. She had the opportunity to work on feature film An Acceptable Loss, as well as do freelance work for a season of Chicago Fire—both produced by the same crew. Any time the crew came to Chicago for a project, Skehan got a call to help with production.

A year later, when she decided to pursue full-time work, she interviewed at film editing company Whitehouse Post and was hired on the spot. “I got to learn a whole different side of production and build new skills,” she explains. “It was post-production, so it involved visual effects, animation, editing, and color correction.”

While she was hard at work, television show and filmmaking company Telepictures took note and reached out about a new opportunity: working for Judge Mathis, a nationally syndicated reality show. She joined the team as an office production assistant and was quickly promoted to associate producer to help production run smoothly.

When COVID-19 hit the United States in early 2020, “we all had to go remote very quickly,” she says. “The program has been on the air for 22 years, and we had producers working with us who had been there since the beginning—and doing things the same way since Day One.”

She and her team members overhauled old systems to support remote work and, as a result of their efforts, they watched the show—along with their skills—continue to grow. Some of the changes they made also helped Telepictures streamline production efforts as they found new ways of working.

After more than three years with Telepictures, Skehan started a new venture in May 2022: serving as a project manager for 2K, a U.S. video game publisher in California. In this role, she’ll help oversee operational processes for multiple projects.

“Because Northwestern’s program is so expansive, it has helped me be expansive in my career,” she explains. “I’ve been able to utilize this degree to do many different things. I worked in production and now I’m doing video games. Everything I learned has become part of my life. It was seamless. The program shaped my career.”