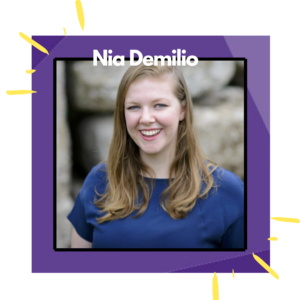 When Nia d’Emilio started looking for internships this summer she was sure about one thing — she had to be involved in the film and tv production process. A short while into her job search she narrowed her focus to finding jobs within the creative development function of the production process.

After applying to a variety of creative development jobs, she landed an internship at Full Spectrum. Full Spectrum is a Chicago based non-profit with a goal of increasing diversity in the film industry by producing work made by women, LGBTQ and minority producers. “They focus on teamwork so it’s a lot less about focusing on individual tasks and more about being a real part of different projects,” she added while explaining the work culture.

During her time at Full Spectrum she worked extensively with scripts, dealing with them from their selection to their execution. While she was given the opportunity to work on any project she liked, the production house also gave her the resources to work on her own project this summer. “My boss asked me what I wanted to get out of this summer, and I told him that if he would let me, I would love to get his help on this idea I’ve had for years about the music industry, I wanted to do a miniseries on a non-male band and how they are navigating the music industry,” she explained further.

A typical day at her internship consisted of a lot of meetings and reading scripts. “It was a lot of me sitting on my computer reading unless we had a meeting about a specific project that we were working on,” she elaborated, “while I do the bulk of coverage for creative development, I have also been in meetings not really related to creative development and my boss has encouraged me to be as involved as I can possibly be.”

According to Nia, Full Spectrum is unique in a few different ways, but what sticks out to her the most is that their main goal is to “drive equity into the film industry” and that the organization is concerned with racial equity as well. “Every project that they do has that footprint and they work with groups that are typically considered marginalized in the film community and they do it successfully, which is admirable,” she elaborated.

While TV and film production will likely continue to adapt to the new environment, Nia is excited to lend her talents newly-acquired skills in creative development wherever they may lead her in the industry.