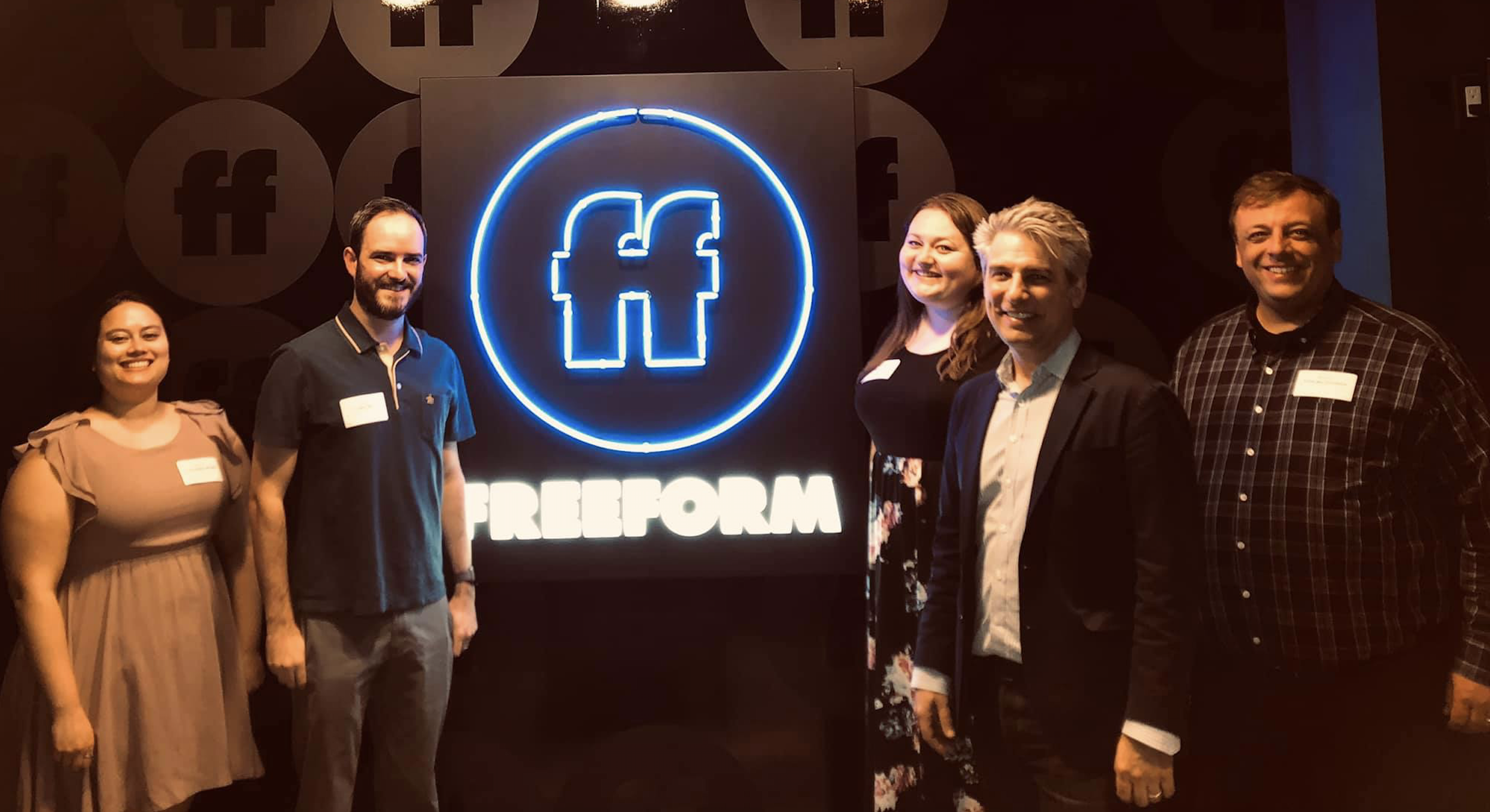 On a trip that took us from Steven Spielberg’s private screening room, inside the headquarters for one of the country’s top talent agencies, and backstage during a live taping of Jimmy Kimmel Live, it’s understandably difficult to pick just one or two of the most impactful moments for me. The entire trip was an exhausting, exhilarating whirlwind that left me educated, inspired, and ultimately missing the Southern California sunshine. But, ironically enough, for a trip that covered so much ground over the course of five March days in Los Angeles, one of the most impactful moments for me personally actually began nearly two months prior, right here in Evanston.

When Kenny Miller, SVP of Digital Programming and Product for Freeform came to campus for an event earlier this year, he took some time to chat individually with the handful of MSLCE cohort members who were in attendance. The discussion culminated with an invitation to visit his office in Burbank during our immersion trip and, sure enough, we hopped right off the plane at LAX and right into Kenny’s corner office overlooking the San Fernando Valley. Kenny took over an hour of his time on a particularly busy week (given that his company, Disney, had just finalized a deal to purchase Fox only a week before) to sit with our small group to discuss industry trends, his personal career trajectory, and his visions for the future of digital television and film distribution. We each left his office with t-shirts and stickers emblazoned with the logo for “Nonstop,” the innovative new digital platform he developed which rewards audiences for viewing ads on his platform – a model that could be emulated by many across the industry in years to come, depending on its early-run success at Freeform.

Meeting with Miller was an illuminating experience for me, personally, as I have been working to carve out a career path for myself in television and film marketing and advertising throughout the course of my time with the MSLCE program. Seeing him test the limits of innovation in that space with a product like “Nonstop” inspires me to follow a similar path. It was also a testament to the power of Northwestern that an executive at Disney-ABC Television would be willing to take that kind of time out of his day to meet with students from his alma mater. Purple pride in full effect!

Another similarly meaningful experience for me was later in the week when we visited with Franklin Leonard and Olivia Mascheroni of The Black List. A platform to help identify and raise the profile of the best out of the masses of unproduced screenplays floating around Hollywood, The Black List has become a Hollywood institution in recent years. By widening the pool of screenplays from which major studios will draw from to make their films, Leonard’s company has helped to address the issues of exclusion and under-representation which have plagued the film industry for years. Mascheroni, a Northwestern alum, was brought on as an executive at The Black List by Leonard after enjoying a successful film production career at film studios like Blumhouse (Get Out, The Purge, Ouija). They each took a large chunk of their respective days to have a frank and honest conversation with our cohort about the industry, challenges we may face, and how they were able to make a career in film while still staying true to their ideals.

“This industry is more welcoming of people who don’t fit the traditional mold than most businesses,” Leonard told us, responding to a question about fitting in as a Hollywood newbie. “You just have to find people who like the same things you like and hang out with them.”

I think it’s pretty safe to say that Franklin Leonard blew all of our minds over the course of our hour with him. The level of insight he has about the film industry is unparalleled, and he is able to articulate it all in a way that I’d never quite seen before. Hearing him speak, and having the opportunity to ask him questions is an experience I will never forget.

When Mascheroni met with the group, she knew that following Leonard would be no small task. “Well, he was just okay, right?” she joked as she arranged us in a smaller circle around her, creating a more intimate setting for the latter part of the program. Mascheroni, though, didn’t need to worry about following that great act, as her portion of the day was equally inspiring to all of us, in a very different way. As a Northwestern grad, and a female executive in a male-dominated industry, Mascheroni made a special point to seek out the aspiring female film producers and screenwriters in our cohort and give them advice specifically tailored toward them. Her counsel touched on everything from technical tips to personal and behavioral lessons she learned from her early years in the industry. It was an extremely valuable session and, by the time we all stood for a group photo together, I knew I wasn’t alone when I was shocked and saddened that it was time for us to leave.

So, while I had previously earmarked various parts of the trip itinerary to point out what I thought would be most exciting to me, that ended up being a futile effort. This is not because the experiences at Amblin Partners, Jimmy Kimmel Live, and HBO did not live up to my expectations (in fact they also exceeded them), but it was due to the fact that I was blown away by these two experiences above, in a way I did not see coming. I know that not only will I remember these experiences for the rest of my life, but these will be my prime examples to use when I evangelize the MSLCE program to anyone who might ask me about it – and even those who don’t!