Data Detectives on an Easter Egg Hunt: MSLCE Student and Professor Collaborate Outside the Classroom 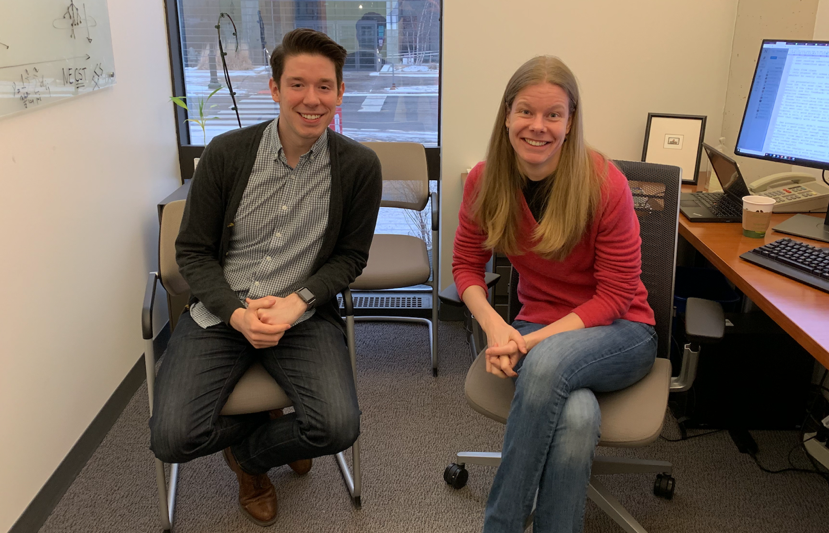 Have you ever been watching one of your favorite movies and noticed a kind of hidden message? Something subtle, and requiring knowledge of another film to understand? Perhaps something left just for you or like-minded fans? It can be a simple as an image of R2D2 showing up in Raiders of the Lost Ark or as subtle as the carpet from Toy Story having the same pattern as that from The Shining. These connections between two separate films are called “Easter eggs,” and one MSLCE student is working with one of their former professors to help track them all down.

Collin Ritter, who expects to graduate from the program at the end of the summer, has been working with MSLCE faculty member Ágnes Horvát this quarter on a research project with a specific aim: to find all of the connections that exist between movies such as these, and to catalogue that data in a searchable and digestible form.

“We have a lot of data collected from the Internet Movie Database (IMDb), and a hidden corner on that site called ‘connections.’ This is a crowd-sourced collection where people reference connections between movies,” explained Horvát. “There are all these connections between movies that people have identified, and for 50,000 of those movies we have data about their connections – like how the Aston Martin from 2012’s James Bond film Skyfall references 1962’s Dr. No…things like that.”

Ritter and Horvát want to take these connections between movies and organize and interpret the data – something that’s never been done before. For Ritter, it will be no small task.

“Collin will work with a graduate student in my lab who has been collecting this large amount of data,” said Horvát. “Since he has expressed interest in data mining, he will dig deeper into the data and help us further contextualize and understand those connections.”

The two data detectives met last quarter, when Ritter was enrolled in Horvát’s class, “Culture and Art Analytics,” which will be offered to students again this fall.

“I developed a love of data science and analytics as an undergraduate,” said Ritter. “So, taking this course as one of my first for MSLCE was just a natural fit – and I’m so glad I did and that I was able to make this connection.”

Ritter and Horvát had numerous informal discussions about analytics, data science, and statistical analysis that began in the classroom, and continued over email. As Ritter remained in touch, he learned more about the research project that his professor would be undertaking, and he let her know that he wanted to get involved.

“The opportunity to have someone who’s interested in these cultural topics as a research assistant really appealed to me,” Horvát said. “We are pioneering a format of independent research which the [MSLCE] program has really been encouraging. This is a unique opportunity, through the program, for Collin to be able to get some research experience.”

An education in leadership and the creative industries starts in the classroom, but it doesn’t have to stop there. If you’re interested in beginning your journey, you can learn more here!