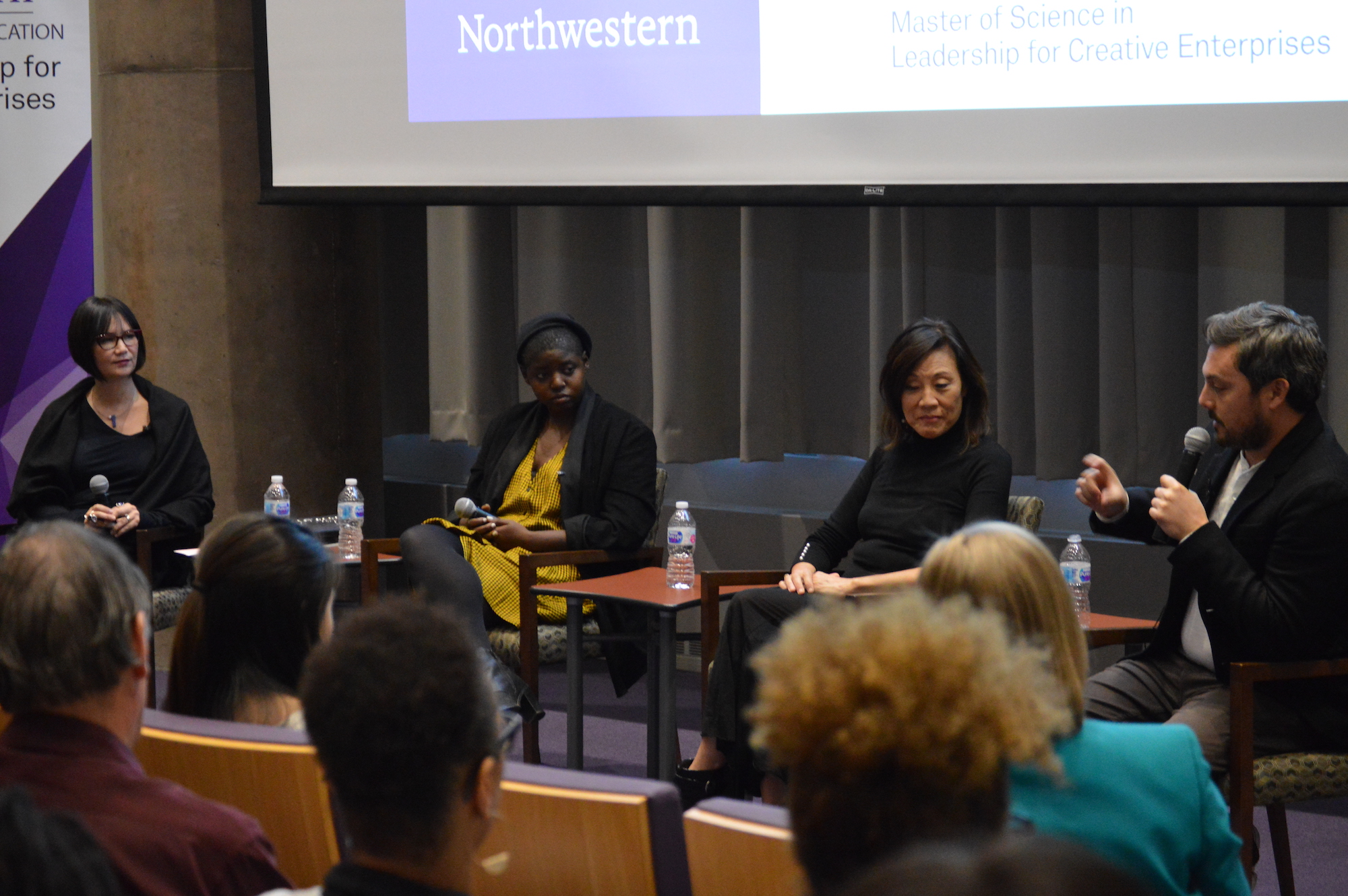 A significant theme in our Master of Science in Leadership for Creative Enterprises (MSLCE) coursework this fall is the power of pathways and networks. On Thursday, October 18, our cohort, along with a number of others, attended a Speaker Series event with three titans of the film industry. Each accomplished in their own right, they spoke to the unique and varied paths they took that brought them all to a similar place—leading with influence, creativity, and passion.

Described by moderator Laverne McKinnon, Producer and MSLCE Faculty, as “the ultimate champion” with “insatiable curiosity”, Golden Globe and Emmy Award-winning Hollywood Producer Janet Yang moves from a deeply grounded place and connection with China that should inspire all of us to create with such authenticity. Janet is a veteran of the industry and shared stories of her time working with Oliver Stone and Steven Spielberg, and the success of Joy Luck Club, the 1993 box office hit that changed Hollywood forever. “It had everything going against it,” Janet commented. “Tons of flashback scenes, a large portion in Mandarin, an all Asian cast… the Greenlight moment—after years of rejection—it was really sweet.”

Another large topic of the night was how to seek out funding for projects and the panelists broke down three basic lanes: funding from a studio, funding from a streaming service buying your idea, and private equity funding by companies or individuals who believe in your mission. Sam Bailey, a writer/director and Chicago native, spoke of her Greenlight journey with the Emmy-nominated web-series Brown Girls and how incredible success came from a few hundred dollars and a lot of dedication.

Dan Farah, film/tv producer and talent manager, recounted the risks he took when he was 26 years old and quit his assistant job at ICM to start his own business. One of his biggest recommendations to young industry hopefuls was to bet on themselves and to “aim high” with their career goals. He noted that too many people “aim low and land there”, and that if you “aim high and fall short of your goals, you are likely to still land in a better place”.  He also advised students interested in various jobs in Hollywood to “pick a lane as soon as possible” and focus on succeeding in that specific area.  Dan also recounted for the audience the details of shepherding large-scale projects—the blockbuster Ready Player One, directed by Steven Spielberg, in particular—from the book by Ernest Cline to the movie adaptation that became Spielberg’s highest grossing film in a decade.

Perhaps the most moving moment of the evening was Janet and Sam speaking to the importance of representation. Sam remarked on her personal vision for her work: “We do a disservice in this country when we limit whose stories can be told. I have an agenda, to tell the stories of women in our vulnerabilities, and if you expect me to write something, it will be aligned with that agenda.” Janet echoed those sentiments: “I see signs of real change. Wonder Woman, Black Panther, and Crazy Rich Asians showed it was possible for the hero to be someone else besides a white man.” As an arts administrator who thrives at the intersections of visibility and social justice, this spoke to the drum beat of my life.