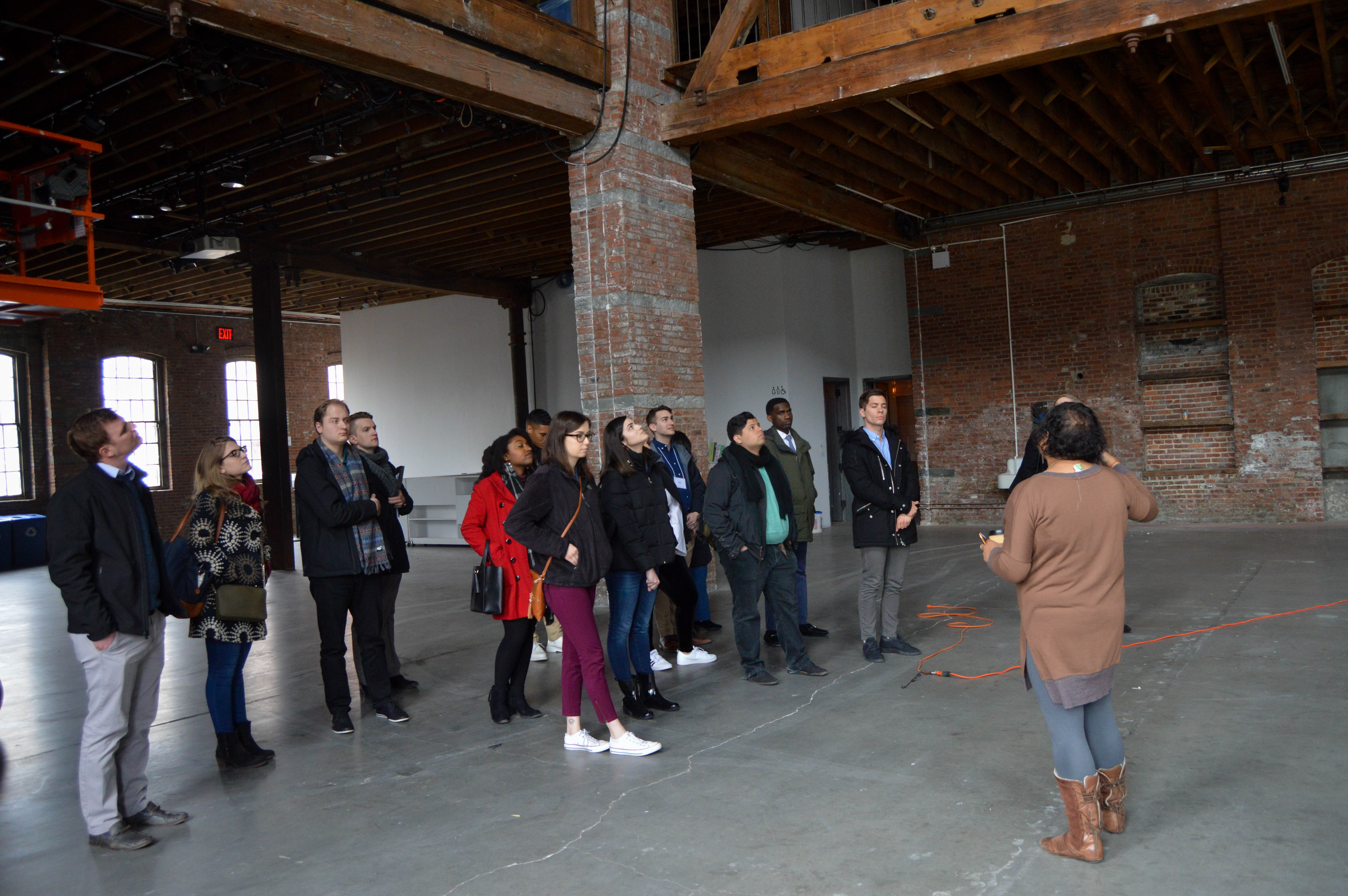 As the winter quarter came to a close, MSLCE students and faculty packed their bags and headed out to one of three trek immersions: New York City, Los Angeles, or San Francisco.  While all three connected students with invaluable professionals and companies in the creative industries, New York stood out as the heart of theatre, a mecca of art museums, and one of the most diverse cities on our planet.

Our visit began with hearing from Rachel Chanoff, director of The OFFICE performing arts + film, which curates works for various clients in the creative industries.  As a consultant, Chanoff gains first-hand insight of leadership styles across several creative companies.  Sharing her bird’s eye view of leadership from various companies gave MSLCE students strategies to take beyond MSLCE and into our creative sectors.

Pioneer Works in Red Hook, Brooklyn is an art and technology incubator that offers interdisciplinary programming for the community.  Operating in a former machine manufacturing warehouse, Pioneer Works serves the Red Hook community through events that welcome new patrons into their space. Director of Public Engagement Sheetal Prajaparti stated that leveraging diversity in the organization is a chronic challenge.  Prajaparti shared initiatives to help diversify visitors such as investing in Front of House operations and the continuation of community events.

Mass Appeal, a media and content company, is uniquely set apart from subsequent organizations with its focus on hip hop culture.  Mass Appeal shapes a multitude of cultural elements such as art, TV/film, digital video, creative services, and contains an independent record label, Mass Appeal Records.  With its strong brand positioning in hip hop culture and charismatic leadership of producer Rahman Ali Bugg, Mass Appeal has established a legacy that both represents the past and looks toward the future.

Known as A.R.T./New York, the Alliance of Resident Theatres helps emerging groups access financial support and resources.  In fiscal year 2017 A.R.T/New York was able to give $155,500 in grants and $1.5 million in loans to support the theatre community.  Deputy Director Ann Marie Londsdale and Communications and Membership Manager Kati Frazier outlined how A.R.T./New York determines membership and eligibility of theatre companies from budgeting, access to rehearsal space, and professional development.

Passion, taste in repertoire, commitment to vision, and board relationships were themes through meeting with Second Stage’s founder Carole Rothman.  Second Stage operates as a non-profit and is committed to presenting American stories by living playwrights.  Rothman’s illustrious history with the company highlighted challenges in its beginning years, all the way through the prestigious purchase of the Helen Hayes theatre on Broadway.  Notable productions include Dear Evan Hansen, Next to Normal, The Last Five Years, and currently playing, Lobby Hero.  Our visit concluded with an exclusive tour of the beautiful Helen Hayes theatre and backstage spaces.

In our free time, students enjoyed Broadway shows, boroughs of the city, delicious cuisine, dollar pizza, and sightseeing.  In the words of the Schuyler sisters from “Hamilton”, New York truly is “the greatest city in the world.”