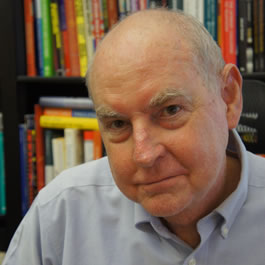 For our first Faculty Spotlight of the 2017-2018 academic year, we interviewed Northwestern Professor James G. Webster about media audiences. Webster researches audience measurement, the behavior of media audiences, and media industries. In the responses below, he discusses misconceptions about audiences, how to determine “a hit,” and predictions for the future of audience behavior.

As someone who teaches the MSLCE course “Understanding Media Markets,” what are some common misconceptions that you find students have about media audiences?

Everyone one of us has experience as a media user. MSLCE students, like most people, tend to think of audiences as collections of people not unlike themselves. This puts the focus on individuals and us to believe that if we can just figure out what makes people tick, then we can figure out how audiences behave. That way of thinking isn’t entirely wrong, but it runs the risk of “not seeing the forest for the trees.” Audiences are more than the sum of their parts. They have their own dynamics that emerge as they scale up. That includes things like audience flow, information cascades and herding behavior. These phenomena aren’t well understood by looking only at individuals.

In the digital media environment, where we’re surrounded by anywhere, anytime media, focusing on individuals encourages us to think that they are in charge of what they see and hear. That’s a common misconception among students and a good many scholars. There are any number of forces out there that shape our encounters with media. Many of these forces are difficult for ordinary users to see or understand.

The discourse surrounding media audiences is typically about how they’re changing (e.g., moving to digital platforms, mobile devices, etc.). How have audiences stayed the same?
Back in 1960, one of the classic works on media effects argued that if you wanted to understand media’s impact, you’d have to consider; 1) the predispositions of individual audience members, 2) the role of their social networks, and 3) the nature of the media themselves. That’s not a bad way to think about audience behavior. People’s predispositions, like their program type preferences or their tendency to choose information that confirms their biases, haven’t changed that much. But the other factors have changed. Social networks now extend beyond face-to-face contacts, and the media environment seems to offer unlimited choices. Those changes enable people to act on their predispositions in ways that were unimaginable 20 years ago. For example, a large minority of the population has never been interested in the news. But in the good old days of three linear TV networks almost everyone saw the news despite themselves. Now the audience is divided between people who consume a lot of news and those who avoid it like the plague. So in that sense, the audience hasn’t changed much, but their choice-making environment has.

Despite the fact that media companies know more about audience behavior than ever before, it still seems impossible to determine in advance what will be “a hit.” Why is that?
There’s an old adage in Hollywood, “nobody knows anything.” Which means, even people with lots of experience and good instincts have a terrible time predicting what will be a hit. The complex nature of social systems and just plain luck seem to be the culprits. Some people claim to know how to make blockbusters, but it’s best to be skeptical. Just think about it, if there really was a failsafe recipe for producing best-sellers, or making something go viral, then everything would be a huge hit. When in fact, most things are doomed to obscurity.
But here’s the irony, while we’re bad at knowing which individual movie, or book, or song will a hit, we know that in any given year, overall movie box office, or book sales, or song track downloads will be highly concentrated. These are sometimes called “winner-take-all” markets. Every cultural market that I’m aware of exhibits this kind of concentration. And all the abundance of digital media isn’t reversing that. In fact, many markets are becoming more concentrated. In the aggregate, these patterns are quite predictable, even though we can’t seem to predict which titles will be the winners.

What predictions do you have for the future of media audience behavior?
One thing I’m certain of is that cultural markets will continued to be concentrated. For example, there’s growing evidence that the scale advantages of big platforms like Facebook, Google and Amazon will attract more and more traffic. The other thing that will be increasingly important is the role of data and analytics in orchestrating the whole digital marketplace. We are ever more reliant on algorithms of one sort or another (e.g, search, recommendation, newsfeeds, etc.). They all depend on sorting through vast amounts of data, but most algorithms are black boxes that we don’t fully understand. And if we can’t see what they do, then we may unwittingly live are lives in “filter bubbles.” Similarly, data are driving targeted advertising (or propaganda) in ways that ordinary users may not recognize. We can’t begin to control the digital media marketplace if we don’t know how is shapes audience behavior.