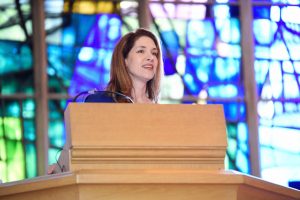 The third cohort of MSLCE students crossed the stage to accept diplomas during the MSLCE Convocation Ceremony, held on August 24 in the Alice Millar Chapel in Evanston.

Families and friends in the audience cheered as one by one the names were called by MSLCE Associate Director Kathryn Lawson and the students, dressed in purple gowns, walked towards Northwestern’s Communication Studies Department Chair Ellen Wartella to receive their degrees.

“It’s amazing how quickly this year went past!” MSLCE graduate Quinton Sprull said after the ceremony. He explained that, throughout the program, students “evolved to richer, more analytical creative leaders… It was a great year of growth, accomplishment, and promise.”

“Flexibility is the key to life,” she said. “Creative people I encounter have very disparate paths to their success.”

Steinhoff drew from her own path, which began at Northwestern, where she majored in speech and minored in theater. She originally wanted to be an actress, but after a few years she shifted to working behind the scenes recognizing that it was another way for her to fulfill her dreams of being a “storyteller.”

Steinhoff ended her address with three bits of advice for the students. First, that “the definition of success may be different for the same person in the same lifetime,” and second, that “the skills you learned while at Northwestern… will serve you in whatever path you take.”

She closed by advising students, “In a world where you can be anything, be kind.”