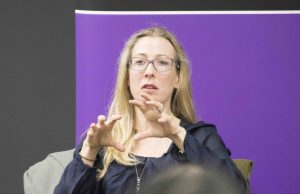 During his introduction of Brigette Whisnant at last week’s speaker series event, Kellogg professor Rick Kolsky said, “I think my job is fun, but she gets to do some really cool stuff.”

As an executive producer at Havas Chicago, Whisnant oversees the content production work for a couple of well-known clients like AT&T and Verizon. She explained that different clients have different strategies, which means Whisnant is constantly challenged to think creatively about how to help generate “that piece of content or that idea or that experience.”

Fortunately for her clients, Whisnant can draw on a long career of impressive experience. After graduating from Northwestern, Whisnant spent five years working for Chiat/Day LA on campaigns like PlayStation, Taco Bell, and Apple. Then she moved to New York, then Minneapolis, for a string of opportunities that led to a number of award winning campaigns, including a series of online films for Amazon.com.

The inspiration to first pursue a career in marketing stemmed from Whisnant’s love of film.

“I’d always dreamed of wanting to create something tangible, something I could see from start to finish,” she said during the event. “So commercials gave me this ability to make films.”

Whisnant enjoys knowing that she has contributed in some meaningful way to the marketing and advertising materials she’s worked on or overseen over the years.

“My imprint is somewhere in the midst,” she said, “I walk away from that thinking, ‘I made that.’”

Whisnant originally considered a career in film editing, but after a short stint at an editing job she decided it wasn’t for her.

“I realized I did not want to be sitting in a dark room all day long,” she said. “I was much happier being outside in the daylight and more being a project manager and bringing those people together.”

Now, as an executive producer, Whisnant explained that her role was a “glorified project manager,” meaning she often helps find the right people to help meet the needs of her clients. When clients reach out with specific requests and deadlines, “My responsibility is to go find those partners who can help.”

Towards the end of the event, Whisnant admitted that her devotion to her job has had its costs.