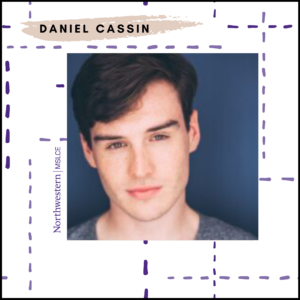 Cassin wasn’t always sure of a career in the arts. Growing up in an affluent suburb of Chicago, the conversations happening within his area and  Chicago, made him question how realistic a career in the arts could be. However, his experience since then has educated in how he can be impactful in the arts. “From the undergraduate level, my goal has always been to give back and to be able to create an accessible space for people who choose to not make the leap because they don’t think it’s possible,” he explains.

In 2016, Cassin graduated from New York University with a degree in Drama and double minors in Child and Adolescent Mental Health Studies and Art and Public Policy. Before joining the MSLCE program, he spent several years performing in Local Theaters and the Disney Cruise Line.

As a professional in the creative industry, Daniel Cassin recognizes the importance of making the arts as accessible as possible and has dedicated his pursuits to this mission. “The conversation surrounding oppression in the creative community is centered around casting people of color and employing directors of color,” he elaborates, “and while that is very important, I think at a nascent level the problem is in lack of minority-based leadership in theatrical spaces.” He believes that this lack of representation hinders advocacy surrounding accessibility.

Cassin intends to get involved with public grant writing for theatrical institutions to further his goal. He sees how the arts could  benefit from public funding, but the problem persists because the arts are usually seen as non-essential. This pushes theaters to be less risky with their casting and directorial choices. He plans to dive further into this issue through his master’s thesis, exploring solutions to this problem by modeling a grant program that would give theaters the financial tools they need to employ individuals that carry intersectional identity.

“For me, true accessibility would only exist when we don’t need to have conversations about accessibility anymore,” he explains. He believes that this can be done by creating a constructive paradigm or model through which people’s stories can authentically be produced or told. To Cassin, the arts can naturally be open to all as the field evolves and grows if people continue to open doors for one another.