Tapping into the Five Styles of Leadership: Leadership Styles in the Media and Entertainment Industries Speaker Series 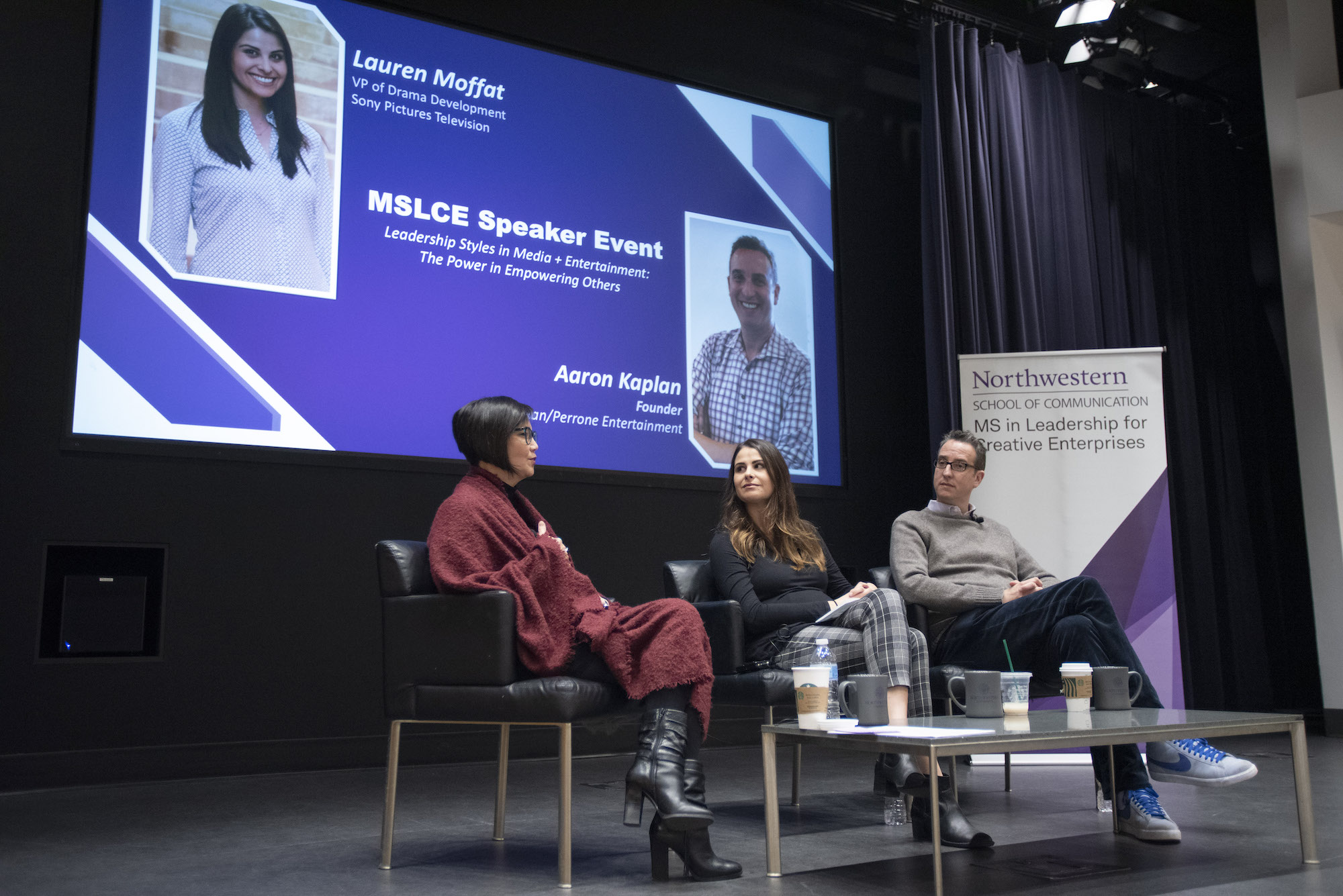 Take a moment to picture someone you consider to be a leader. What is it about them that makes them stand out? Is it her perseverance and how she focuses on the group’s vision? Perhaps it’s his ability to keep his team aligned and accountable. Or maybe it’s their imagination and intuition when solving difficult problems. As students in the MSLCE program, we’re learning about our own personal styles of leadership and how to most effectively tap into them.

This was a topic for discussion for the Speaker Series, Leadership Styles in the Media and Entertainment Industries with Lauren Moffat, Senior Vice-President of Drama Development at Sony Pictures Television and Aaron Kaplan, Co-Founder of Kaplan/Perrone Entertainment.

The conversation was moderated by MSLCE faculty member, Laverne McKinnon, who shared the Co-Active Leadership Model with the speakers and audience. This concept is designed to describe the different types of leadership styles. Rather than seeing ourselves as one “type” of leader, this suggests that leadership is fluid and flexible, so leaders must shift accordingly to suit the situation.

The five forms of leadership all work together and are each prevalent at different times to solve challenges.

In her role at Sony Pictures Television, Moffat explained to the audience how each of the styles of leadership resonate with her, depending on her task or who she’s working with. However, there was one that she said she felt isn’t her go to: leader in front. She described how some leaders really like that role and that their biggest challenge can be listening to people. Moffat suggested the other styles have been more effective for her when working with her teams.

Kaplan agreed, mentioning how leader in front feels the least natural to him. In the entertainment industry, he discussed, there isn’t necessarily one style that dominates. “There’s a lot of personalities and people who are aggressive and forward-thinking,” said Kaplan. “The aggressive desire has to be part of growing a business. For a business to survive and grow, you need to have that leader who pulls everyone along.”

Managing those personalities, especially with high stakes around budgets, can be tricky. Moffat expressed how she’s become the type of leader who delegates, or a leader beside. “In a production, everyone has to have a sense of belonging and ownership. That delegation is really important,” she said.

Stepping into a leader beside role is also a value Kaplan sees at his company, which is focused on maintaining a strong corporate culture. “Everyone feels like they are part of a team. All of those voices along the way are taken seriously.”

Both Moffat and Kaplan started their careers as assistants at agencies, which they strongly recommended to our cohort members interested in film and TV, since it helps build relationships. They echoed the importance in finding mentors, or in our case leaders behind, to help with growth. Having a strong mentorship can take you far, which Kaplan stressed. “One of the things that’s really great about Hollywood are the people who have been there for a while and are really supportive of the people coming up.” He encouraged students to not be afraid to ask for help and look for support and mentors early on in their careers.

Another way we can bring out our leader beside is through designing a team charter or alliance when we begin working with a new team. Professor McKinnon mentioned this topic to the speakers, who resoundingly agreed. This is something we as MSLCE students have been focusing on a lot this quarter as we learn to work within our new cohort. Kaplan brought up the fact that these designed alliances may not come organically in the workplace, however, the benefits are worth putting in the extra work.

Recognizing our own values as leaders within and then switching gears to leaders beside as we design our alliance is just one of the many reasons why it is important to think of ourselves as leaders in different ways. Taking these methods and applying them in our day-to-day lives will also help as we continue our growth throughout the MSLCE program.