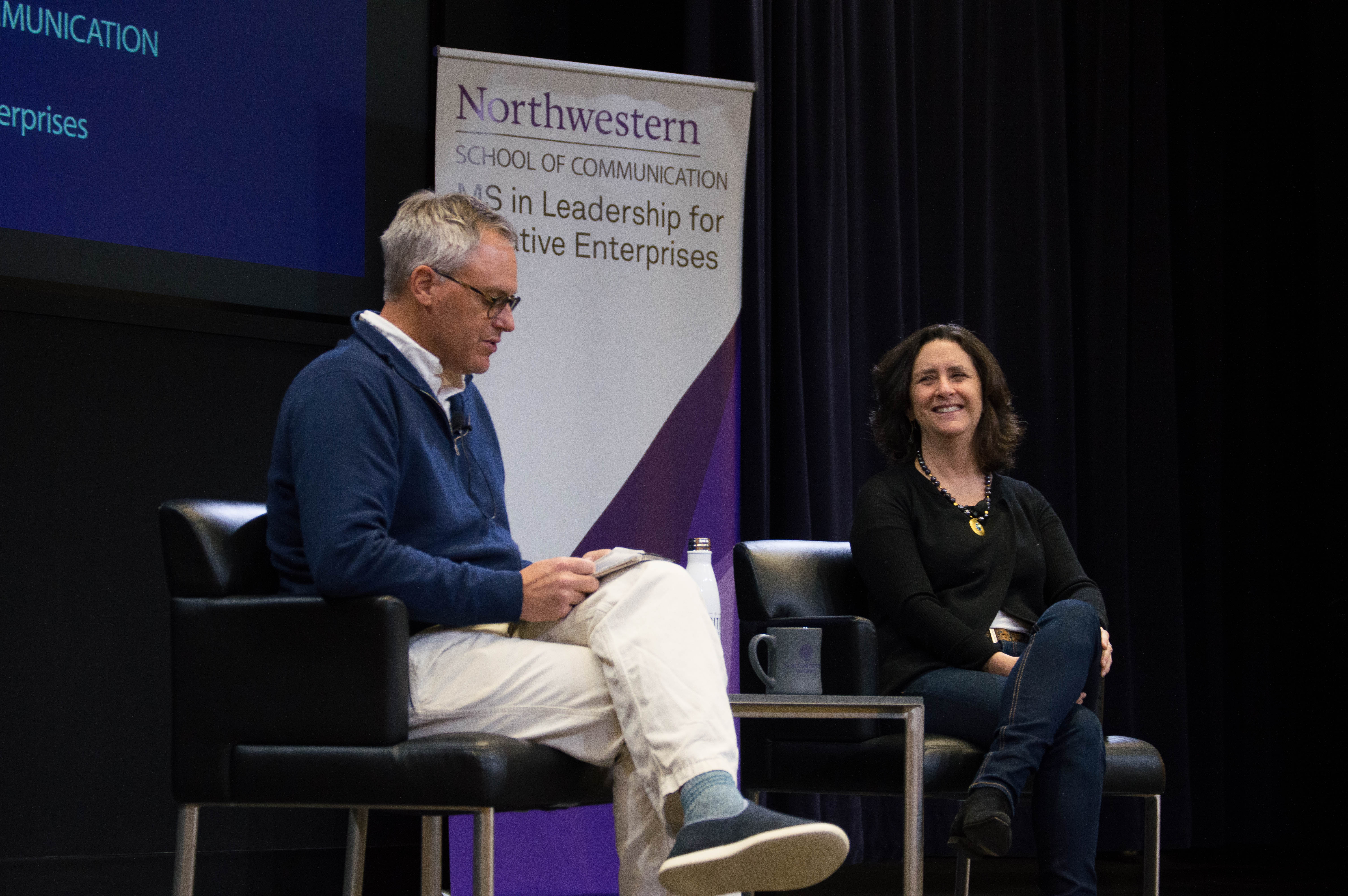 As graduate students, we are constantly seeking advice on how to advance our careers. But when that advice comes from an Emmy-winning film producer and CEO/Founder of her own media company, it carries a special weight. Thanks to the MSLCE program, we were granted the opportunity to meet, hear from, and most importantly learn from acclaimed filmmaker, businesswoman, and all-around trailblazer, Gigi Pritzker, on January 17th.

Pritzker’s company, MWM (Madison Wells Media) is a comprehensive, multi-channel media and content company, with offices in Chicago and Los Angeles. Through her company, and its subsidiaries, Pritzker undertakes a number of high-profile media projects, including feature films, television, live events, and augmented and virtual reality projects. Pritzker and MWM boast Academy Award nominations, Emmy wins, and numerous other national accolades – so, suffice it to say that she’s had an extremely successful career. But, as she explained to us during and after the event, her career path hasn’t been without its twists and turns:

“I had originally thought that what I was going to do was to work at an NGO in Asia, because I was studying anthropology in college,” Pritzker explained to moderator (and MSLCE faculty member), Gregg Latterman. “So, I gave a presentation to some professors in the anthropology department…on my thesis, and they were deeply unimpressed. Afterwards, my professor for documentary film in anthropology said I should instead be going to film school. That was not anywhere in my plan, but he convinced me it made sense, and so I did it.”

A non-linear career path is a concept that can be all too familiar to members of the MSLCE cohort. Amber Hozey, a current student, is thinking of making a career shift from primarily classical music to working on music for television and film. Speaking with Pritzker one-on-one after the event helped to assure her that she was making the right move.

“She reassured me that it was the right move for me and that I have a great mind for it,” Hozey said. “It meant a lot to hear that she thought I was headed in the right direction.”

Even students who didn’t originally see their career plans matching up with the work Pritzker and MWM are doing discovered that there was more overlap than they had previously thought.

“It was really cool to get the chance to talk with her about my career and interests,” said Alex Brown, another current MSLCE student. “As someone who creates their own podcast and is interested in podcasts, it was interesting to learn that MWM is also working on some of their own.”

Students and attendees all left the event entertained by Pritzker’s tales from the industry, informed by her keen insights, and inspired by her life’s story – not all career paths look the same, but she showed us all that with the right mix of determination, tenacity, and work ethic, achieving excellence in the entertainment industry is within all of our reach.

For more information about Gigi Pritzker and MWM, visit their website here.