MSLCE Students get Unforgettable Inside Look of LA 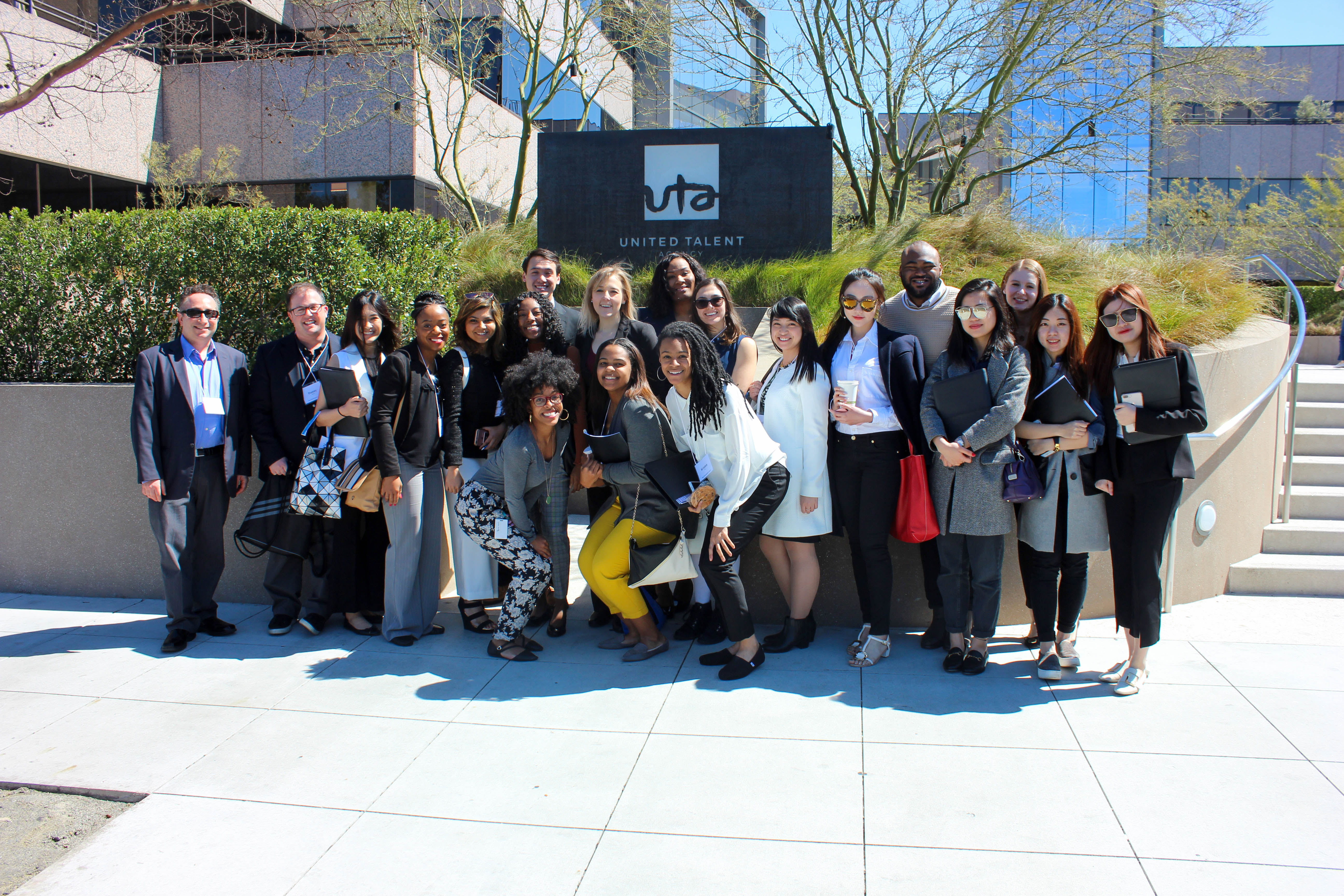 The MSLCE Trek to Los Angeles gave a group of 18 student an unforgettable inside look of Hollywood, talent agencies, studios, production companies and more. The opportunity to meet with the industry’s top leaders allowed students to gain incredible insight into what it takes to be successful in the film and television industry. “What really stood out to me was the value of networking. Knowing people is the cornerstone of success in the entertainment industry and you have to have perseverance to make it in LA,” said Ben Shiplett, MSLCE Student.
After a great start to the Trek, the Wednesday sessions kicked off with a fantastic speaker; Vance Garrett who is the Vice President of Experiential Global Entertainment for Westfield; one of the world’s largest mall and venue owners. Vance has extensive experience as an experiential event producer and walked the students through what it was like to create “Instagram-worthy” experiences like the Museum of Ice Cream.

After a short bus trip to Universal Studios and a visit to CityWalk to visit the various shops and restaurants we sat down at Wasabi for a great lunch. Following lunch, we sat down at Universal Film Music and Publishing, the global leader in music publishing, and met with Mike Knobloch, the president of Universal Music Publishing Group. Mike graduated from Northwestern in 1992 and after moving to Los Angeles has risen in the industry to be one of the most recognizable music supervisors. He’s overseen the musical scores for films like Avatar, Fast Five, and Pitch Perfect, and was nominated for a Grammy Award for best song written for visual media for Fifty Shades Darker. Mike walked us through his process for creating and executing musical scores and shared how they created a cover of Coldplay’s The Scientist by Corinne Bailey Rae.

Our trip then took us a short ride over to Amblin Partners at Universal Studios. Amblin Partners is the umbrella production studio for DreamWorks Pictures, Participant Media, and Amblin Entertainment. They’ve put out movies and television shows going back to E.T. and as recent as The Post and Ready Player One. During the visit we had an opportunity to sit down with the Co-President of Production of Amblin Partners; Jeb Brody, a Northwestern University alum who sat for two hours giving us an inside look at Steven Spielberg-led productions and the film industry as a whole. “I really loved being at Amblin Partners and getting to experience a classic Hollywood film studio. Speaking with Jeb really inspired my career goals” said Jeremy Morall, MSLCE Student.
The last full day of the Trek began with a breakfast networking meeting with Marc Provissiero of Odenkirk-Provissiero Entertainment. Marc got his start as an agent at WME and his company now manages various actors and creative projects. Marc shared his thoughts on his history in the industry and where he sees movies and television, especially comedic works, going in the coming years. His company just premiered a new show on Netflix and they have clients including Kristen Wiig from Saturday Night Live and other comedian celebrities.
Amazon Studios presented an amazing opportunity to sit down with several development executives who shared their vision for Amazon Studios relationship within the industry. Amazon has created a number of noteworthy films and television shows in recent years including Transparent, the Golden Globe winner for Best Television Series, and Academy Award winning movie Manchester by the Sea. The development executives, Brianna Oh and Michael Chong told students about their career paths and how they envision Amazon Studios as part of the larger Amazon company.

Thursday afternoon’s site visit took students to Participant Media which has produced films and documentaries like Spotlight, He Named Me Malala, The Help, and An Inconvenient Truth among many others. We had an opportunity to meet with a number of their development team including Kristi Whisler, a Northwestern alum who is the Director of Documentary Film and TV for Participant Media. “Participant Media absolutely blew me away. I was especially impressed by the organization’s social impact department, which ensures that all projects have lasting positive impacts on society. It’s clear that so many players in the entertainment industry are dedicated to improving the world through storytelling, and I’m so excited to contribute to this effort upon graduation” said Haley Baker, MSLCE Student.

Our last visit of the Trek took us to NBCUniversal Studios and an opportunity to sit in the audience for a live taping of the Steve! television show with Steve Harvey. The students were able to see what goes into creating a live television production and one member of our group was actually on television. Cindy Beasley was selected to participate in the Harvey’s Hundreds game and she won! The group was able to get a behind-the-scenes look at a live TV show from the camera work to the audience direction and we saw Steve Harvey interview several guests and panels as part of the show.
“The trek to LA was perfectly curated and further stoked my passion for the creative industries. Meeting with industry alums and having intimate conversations with top executives from Amazon Studios, Amblin Entertainment and Participant Media was illuminating and altogether surreal. The rallying cry from everyone we met is that breaking into the industry is not easy, but it’s achievable and worthwhile. There’s no doubt that the uniqueness of the MSLCE program and the power of the Northwestern network has strategically positioned us to do just that” said Metra Gilliard, MSLCE Student.
The LA Trek had a fantastic opportunity to experience every aspect of the film and television industry and it left students feeling inspired and determined for what comes next for us once we graduate from the MSLCE program. The chance to meet with the industry’s top executives was a unique and once-in-a-lifetime moment that has impacted many students in the time since we’ve returned to Northwestern’s campus.