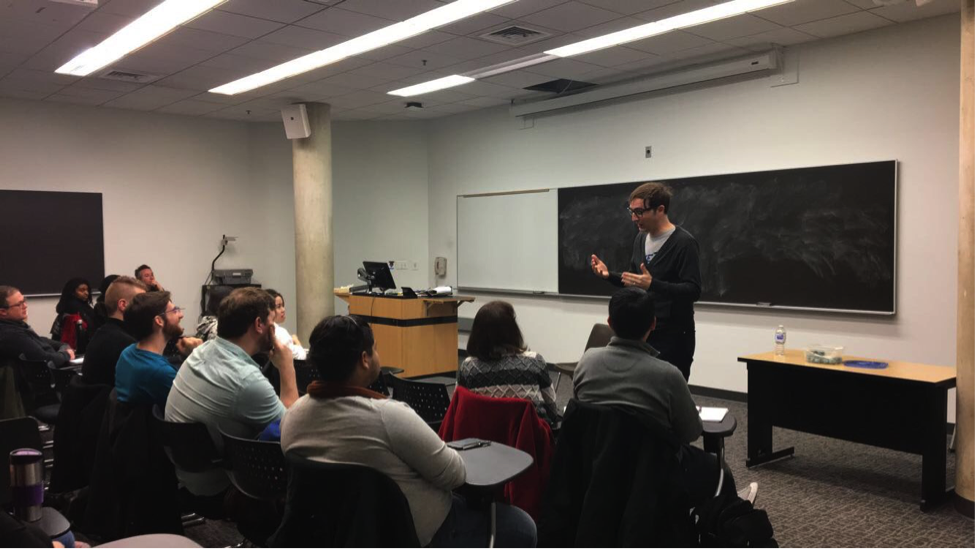 Brett Neveu has been writing plays since he was 15, and currently finds himself between the “I can’t believe I’m doing this still” and “satisfaction” phase.

During a faculty talk with MSLCE students, Neveu reflected on finishing the draft of his latest production, Traitor. The playwright and teacher of Northwestern University’s Radio, Television, and Film Department describes his profession as the only job that has ever made him feel this way, referring to the “strange high” he gets while writing.

Neveu grew up in Newton, Iowa to a mother who worked as a receptionist for the Department of Human Services and a father who was a social scientist at Shell Industries. While his dad traveled for work often, he remembers his mom taking him to community theater to keep him occupied. He recalled sitting in the very back of the theater, atop of the seats, and getting lost in the performances of Trial by Jury, Hello Dolly, and South Pacific.

After his debut as the Wise Donkey in The Patchwork Girl of Oz, Neveu went on to act and write poetry throughout high school. He majored in theater at the University of Iowa, where his pieces were well received. While there, he became the Artistic Director of No Shame Theater which, still exists today. After moving to LA and Minneapolis, Neveu found opportunities that that brought him and his family to Chicago.

His mentality of “do it yourself stupid” has added to his continued success as a playwright. Neveu suggests that if no one will pick up your concept or produce your plays, you just have to go for it. That is exactly what he did, putting on puppet shows in bars, giving his absolute best. However, he never stopped writing and now the demand has grown. Directors are championing his works of family dynamics with a twist, at A Red Orchid Theater where they have produced eight of the ensemble member’s plays. Many of them have received prestigious awards. Although the master storyteller can be found rocking out with his band occasionally, he has no intention from straying away from his city nor his craft because this is where his voice lives.