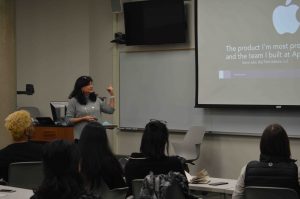 Creative minds typically house bold, novel and elaborate ideas, but can brainstorming lead to the production of dull and unoriginal ideas, even in a group of creative people? Leslie DeChurch certainly believes so, and she has the research to back it up.

Coming from the Georgia Institute of Technology as a Professor of Organizational Psychology, DeChurch has a research background in leadership and team dynamics. She now teaches in the School of Communication at Northwestern University. When she is not teaching, DeChurch is helping NASA’s teams work more efficiently in their mission to put humans on Mars.

Last Thursday’s faculty talk session gave MSLCE students a new perspective when it comes to sustaining healthy team relationships, particularly when it comes to communicating across different departments, personalities, and areas of interest. After a brief introduction, students were immediately put to the test by challenging and measuring the cohort’s creativity. Split into groups of five to six people, students were given a list of pairs and tasked to identify ways in which to categorize these pairs. Choices ranged from Adam & Eve, to Bill & Melinda Gates. Expectations were clear, but there was confusion in the air.

“Innovation is the province of teams,” says DeChurch. Her group activity, which was essentially a quick experiment to further validate her research, confirms that brainstorming can truly stifle creativity. Results were broken down by fluency, which is the number of ideas, flexibility, the quality of ideas, and process, the team’s chosen method for ideation. The team that came up with the most classifications might’ve had the greatest fluency, but, consequently, flexibility took a significant toll. Additionally, those with a defined process, like setting specific rules or designating time for individual reflection, ended up having less fluency with higher levels of flexibility.

Students are conditioned to think that brainstorming is the ultimate form of ideation. But, the power of individual thought processes should not be overlooked.

Groups are plagued by various social forces that work against creativity. For example, there is production blocking, which is the notion that team members cannot express ideas when others are talking due to our inability to multitask; rather than ideating, we are listening. According to DeChurch, high-performing teams balance three key qualities: affect (emotional engagement,) behavior (dynamic structuring,) and cognition (team/brand values.)

Innovate, create. First, groups should strive to innovate, then they can create.