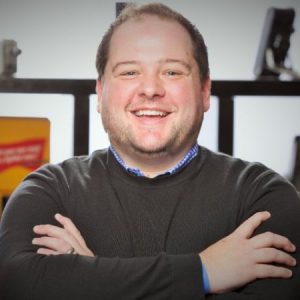 Long before Chris Meador took a job at Facebook, he thought about pursuing a career in acting.

He majored in theatre at Northwestern, but then, as he explains with a deadpan delivery, “I realized I  wanted health insurance.”

Meador, who now works as Facebook’s Brand Strategy Lead, will appear at MSLCE’s next speaker series event, on Dec. 1 at 5:15 p.m. He’ll discuss his career, which has taken him from NBC to The History Channel to Microsoft and finally to the largest social media platform in the world. It’s this last role that has made Meador aware that the professional world is in a moment of transition, and Facebook is leading the way.

“Working at Facebook has really been the thing that has shined the light on the fact that the modern workplace is not yet defined, we are currently breaking so many models, norms, conceptions,” Meador said. “I went to Facebook… because I felt it was a company that was going to define the next generation of jobs.”

Throughout his career, Meador has overseen large numbers of people and has gone it alone. In his current role overseeing the global brand strategy for Facebook’s advertising efforts, he works with people who choose to partner with him on projects. It’s a situation he’s come to value.

“If you do not show me mobile first you cannot come in here,” Meador said.

The many shifts Meador has observed throughout his career — technological and organizational — has cemented in him a concept he plans to make clear during the speaker series event: that it’s to not know what’s next.

“I don’t know what I want to be when I grow up, I still have no idea and I don’t think I’ll ever know and I think that’s okay,” he said. “The job I have now didn’t exist four years ago and the job I might have next might not exist now.”