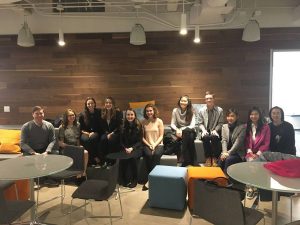 Amanda Abar, the Executive Vice President of 360i Chicago, led the discussion about her current role and the many steps she has taken to get to where she is today. The digital marketing agency is based in New York with six additional offices, from São Paulo to London. On top of the company’s diverse catalog of clients, like Coca-Cola, HBO, Oreo and Toyota, 360i has proudly been named to AdAge‘s “Agency A-List” for four straight years – no easy feat in an increasingly saturated industry.

360i isn’t the only agency creating impactful work, so what sets it apart from the rest of the competition? To them, it’s all about actionable insights. Each project begins by finding actionable insights about the brand, category, culture and consumer in order to create an effective strategy. They often use social listening in order to gauge internet conversation surrounding a particular brand or specific ad campaign. Manager of Insights and Planning Lilly Chow noted that “social listening is about finding the qualitative within the quantitative.” In other words, volume isn’t their only or primary concern. Are tweets, Facebook posts and Instagram comments positive, negative or neutral? Who is talking about it? How do they describe it? These in-depth metrics determine the overall success of 360i’s work because it helps the agency and its clients better understand consumer behavior and engagement.

“Conducting business is like having an interview,” said Amanda. While 360i has an impressive collection of past and current creative work, so does everyone else. The agency constantly strives to prove itself to its dedicated clients; “that’s how we maintain our long-term relationships.” The same thing can be said for its influencer marketing department, a branch of the company that builds high profile influencer partnerships for various brands and projects. This means reaching out to popular bloggers and fans that have a unique social influencer track record on the internet. Communication between clients and partners has to be carefully executed and transparent in order to create genuine interest at all levels.

After meeting a handful of 360i’s staff, despite their varying job titles, they all echoed the same basic belief: Be yourself. Find something interesting. And go pursue it. Passion comes from within.