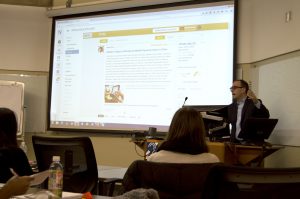 The MSLCE program consistently brings in industry professionals as guest speakers to augment and expand upon the principles taught in class. Professor Daniel Gruber (above) hosted seasoned TV guru Hank Price during his Business Models in the Creative Enterprises class to help the cohort understand how to take a failed business model and turn it into something fresh.

Price framed his discussion around his current project at WVTM 13 in Birmingham, Alabama where he was taken on as president and general manager to fix the struggling station’s declining ratings.

While much of the news surrounding the media industries has highlighted the new challenges caused by internet disruption, Price offered a more optimistic take, asserting that the growing pains have begun to level out. He told the class, “you live at the absolute best time anyone could live to be going into the media business… we are now in the world of appropriate media for the need.”

Price took the class through a presentation where he outlined the problems posed to him when he was asked to take the reins at WVTM 13. He displayed the various slogans and catchphrases the producers developed and showed the strong disconnect there was between the segments and how difficult it was to identify the brand of the station. He described these segments and slogans as “magic-bullets,” a quick fix to a larger problem that was brand identity. The problems of the TV station were numerous, but Price presented common-sense solutions to complex problems by refining down the message and upgrading the quality of programming.

Price provided an entertaining and informative perspective on how to change perception of a brand in the media business while also offering inspiration to students as they prepare to enter this challenging field. His perspective on the ways the business work and his close examination of the issues faced by WVTM 13 gave the students a chance to see how effective management can change the course of a failing enterprise. He added a significant piece to the discussion surrounding business models and was an example of a class-act in the entertainment business.