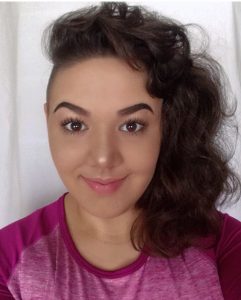 Experience: My (award-winning!) thesis for my English literature degree, titled “The Modern Rom: Literature, Culture, and Identity”, was recently accepted for publication in a literary research anthology. The journal is poised to be released in early 2018.

Ideal Job in 10 Years: A leading administrator at an opera company, or some type of project management role in a nonprofit performing arts company.

What led you to enroll in the MSLCE program at Northwestern? Originally, I intended to teach high school English, and was enrolled in a dual-degree (BA of my choice [English lit.], and an M.Ed) program at my undergrad university. However, as I completed my “field” work in the classroom, I realized that being an English teacher would not offer many opportunities for me to sharpen and use many of my innate skills; and that I likely would not be able to continue feeding into my passion for opera and classical arts within my classroom. As I began to look at other educational and career options, my voice instructor suggested that I investigate arts administration. After my initial hesitation to leave behind the three years I’d already completed in my five year program, I realized that pursuing a career in this field would be a much better fit for someone with my particular skills and interests. Northwestern was my top choice, and I’m delighted to have earned my place in the MSLCE class of 2018!

What is your favorite Chicago landmark/attraction, or what are you most excited to visit? I’m told there’s a dog beach in close proximity to Northwestern’s main Evanston campus….

If you had to describe yourself in three words, they would be… Warm, ambitious, and intuitive.

If you could live anywhere in the world, where would it be? The thought of leaving California physically pains me! (Though, if I absolutely needed to relocate, I would pick New Zealand.)

If you could donate one million dollars, which cause/organization would you choose to support? I would spend some time on GoFundMe and completely fund as many campaigns as my million dollars would permit. In addition to crowdfunding campaigns having much less of an audience reach than many (also donation-worthy!) organizations, in my opinion, there is no good reason why anyone should have to resort to crowdfunding for their medical expenses, tuition, etc.

Where are you from? San Jose, CA