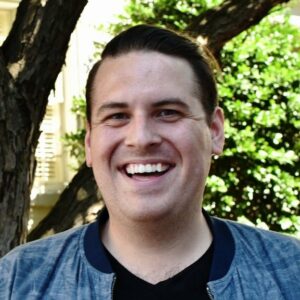 TJ Billard, PhD is an assistant professor in the Department of Communication Studies. They are a political communication scholar whose research spans mainstream communication studies, the sociology of social movements, and transgender studies. Their research has appeared in a number of prominent academic publications, including Communication Research Reports, Frontiers in Psychology, the International Journal of Communication, Journalism & Mass Communication Quarterly, Marketing Theory, Mass Communication and Society, Media, Culture & Society, and Politics, Groups, and Identities, as well as in venues such as the Oxford Research Encyclopedia of Politics and the SAGE Encyclopedia of Trans Studies. Dr. Billard previously served as Consortium on Media Policy Studies Fellow and, later, as Archival Fellow at the National Center for Transgender Equality. In these roles, they established the Trans Equality Archive, the single largest collection of transgender political history in the United States. They received their PhD from the Annenberg School for Communication and Journalism at the University of Southern California and their honors BA from the School of Media and Public Affairs at the George Washington University.