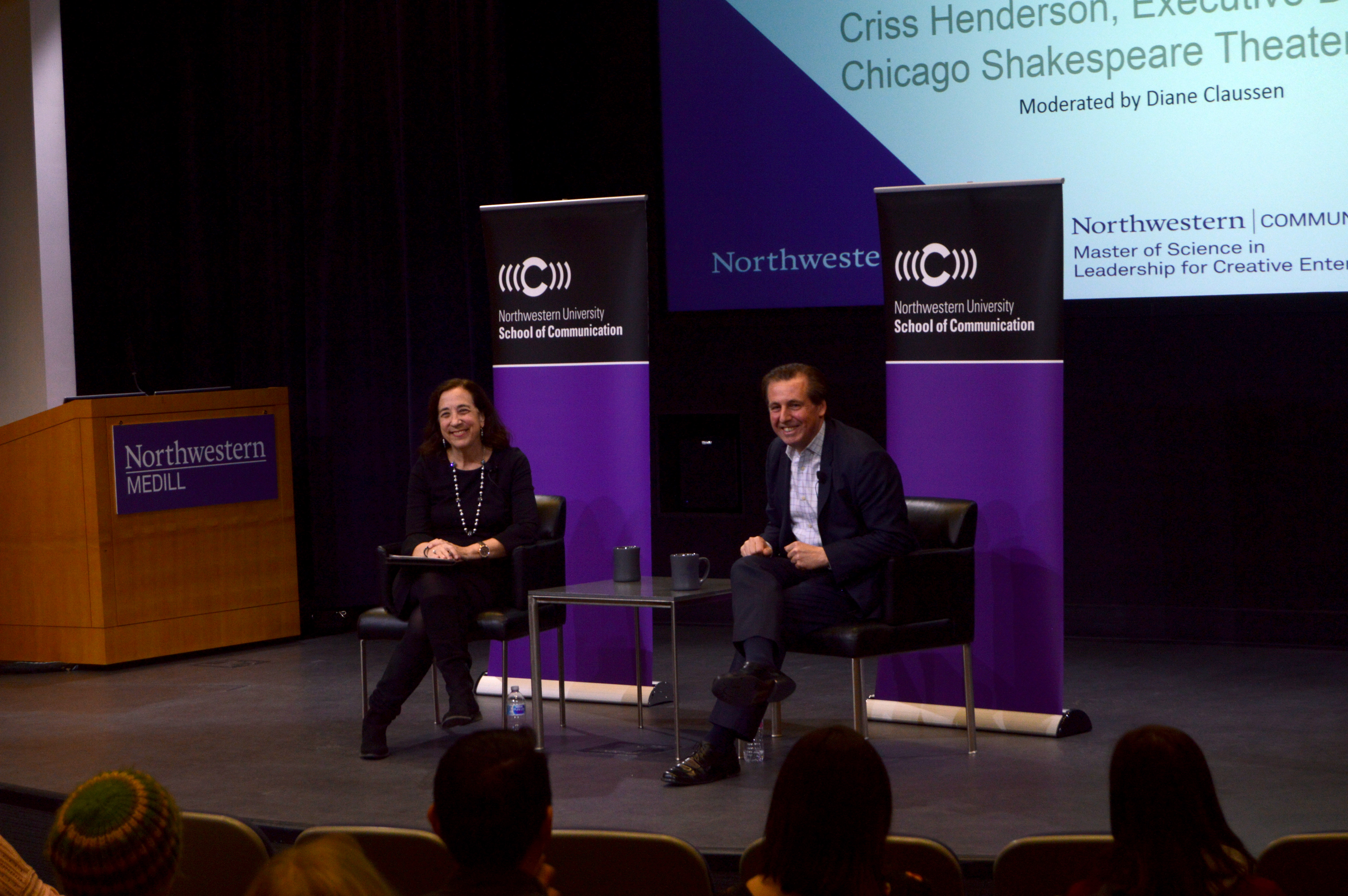 On Feb. 1, Criss Henderson acknowledged a unique quirk of his professional career to an audience of MSLCE students and other members of the Northwestern community: “I have one of the greatest jobs in American theater, but I have one of worst resumes.”

By “worst” Henderson really means “shortest.” That’s because he’s held the same job for the past 28 years as the Executive Director of Chicago Shakespeare Theater. During the MSLCE program’s most recent Speaker Series event, Henderson told the audience how a person with little interest in the world’s most renowned playwright became the head of an organization dedicated to his work, and how he’s managed to keep that work exciting over the course of nearly three decades.

“One of the reasons we are where we are today is because I am not a risk averse manager,” Henderson said. “We’ve probably risked more than most would, especially financially.”

Chicago Shakespeare Theater is a Regional Tony Award-winning organization based out of the city’s iconic Navy Pier. As Henderson explained during his talk, the process by which the company went from being a small operation based out of a Lakeview apartment to becoming one of the city’s leading cultural institutions was one that included an innovative approach to a familiar subject.

For instance, when the company moved to its Navy Pier location in 1997, its staff made a decision: Shakespeare’s work would be a guide, not a limitation. Rather than solely produce Shakespeare shows, the company decided to expand its scope to work of quality that felt consistent with Shakespeare’s repertoire.

“Shakespeare went from being our resident playwright to becoming our standard of theatrical excellence,” Henderson said.

The move paid off. Now, CST has an audience of subscribers who are passionate about Shakespeare plays, as well as separate audiences that comprise students, families, and lovers of the international work the company consistently brings in.

“The pillars of the organization are productions, international collaborations, and our commitment to education,” Henderson said.

Henderson also discussed a bold move his organization made more recently: to build The Yard, a dynamic performance space that can be rearranged to accommodate different kinds of productions and seating capacities.

“We really needed a third platform that could play to a larger capacity,” Henderson explained. The question he tried to tackle with The Yard was, “How can we create a low-cost project, and how can we create something responsive to theater makers?”

The result is what may become a new trend in theater, where the shape of the theater itself changes depending on the production. “It is really something,” Henderson said. “When you enter into it, you can’t imagine it ever was a different venue.”

During the talk, Henderson also described the importance of increasing diversity in theater, and Chicago Shakespeare Theater’s active role in the process.

“When you zip back to late 80s, early 90s, when it was most uncommon to see an actor of color on stage in classical work… most of our early work was done with multicultural cast,” he said. “Creative industries across the country need to do this work.”

Towards the end of the event, when answering a question from the audience, Henderson remarked on the importance of the MSLCE program not just for its students, but for the creative community as well.

“Your charge, and why this program is so exciting and so important, is to try to rip us all out of our institutions and our siloed art forms and find ways to come together, because it is the future,” Henderson said. “It will take all of us to reinvent things.”