MSLCE Students Learn How a Late Night Show Gets Made During Visit to The Onion/A.V. Club Studios 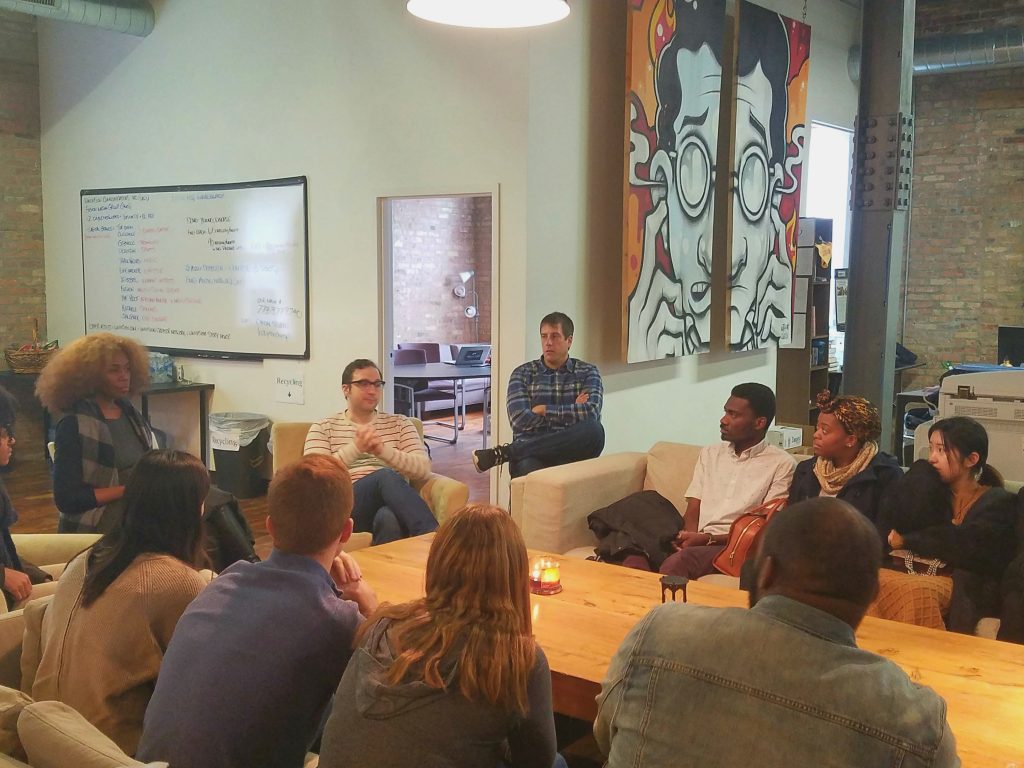 As I entered the 2nd floor of The Onion/A.V. Club studios today, laughter erupted from the room directly to my right.
It was Friday afternoon, and the creative writing staff was hard at work planning the outline for next week’s episode of “A.V. Club Live.” The weekly late-night style program (presented as a part of the Fusion television network) is The A.V. Club’s first foray into television broadcast.
“That’s what it’s like here,” Executive Producer Alicia Haywood said about the laughter as I toured the facility. “A.V. Club Live” operates out of a humble building in Chicago’s West Town. As several staff members pointed out, the building was not designed to be a production studio, but the staff and crew have taken great advantage of the small location, constructing sets, meeting rooms, production offices, and even a beautiful lounge area (scented candles and all).
A group of MSLCE students and I sat down with Haywood and other members of the production and creative teams to pick their brains about the show. “A.V. Club Live” launched in March, and its staff is currently working on the last two of its thirty-episode first season. Haywood provided a breakdown for production of an episode: The week starts Wednesday, when the creative team sits down, and over the next few days looks at the major headlines and decides what they want to talk about for the next show. By Friday, they have assembled a rough script, they finalize it on Monday, shoot it on Tuesday, and do post production on Wednesday. The show is broadcast on Thursday evening.
When asked how they decide what to content to cover, The A.V. Club Editor-at-Large and “A.V. Club Live” Host John Teti said the winning topics are, “whatever gets the blood flowing.” He explained that he aspires to “teach people how to deal with the era of fake news.”
All the members of the creative team were wonderfully engaging, and the office had an air of humor that displays their comedic and professional style.
“My biggest takeaway was the overall collaborative atmosphere at The A.V. Club,” said MSLCE student Chad Hewitt about the visit. “It was especially interesting learning their weekly schedule for producing the show.”