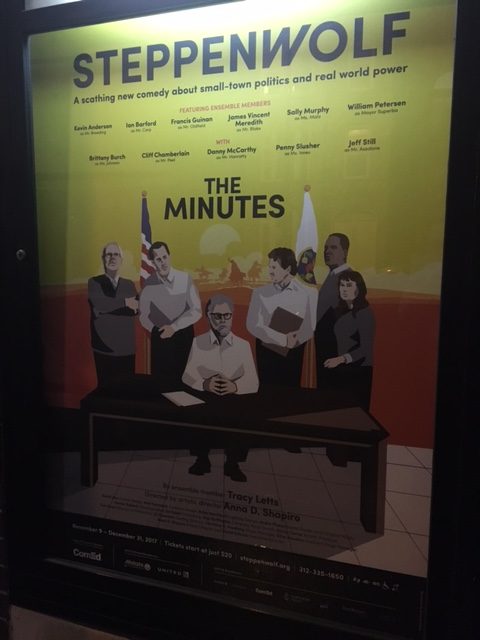 On Friday, Nov. 17, MSLCE students had an opportunity to sit down with leaders from Chicago’s Tony Award-winning Steppenwolf Theatre Company for a discussion about their respective careers, the history of the organization, its current focus, and its future plans.

Students met with the Executive Director David Schmitz, Artistic Producer Jonathan Berry, and Professional Leadership Assistant John Rooney. The conversation started with an overview of the work history of both Schmitz and Berry, which served as inspiration for many of the students in the group who are pursuing careers in theatre management and administration. Both of their paths started with masters degrees in directing, and led them to leadership positions at one of the most renowned regional theatres in the country.

Schmitz described how Steppenwolf grew from a 10 member ensemble working out of a church basement in the late 70s to the current 49 member ensemble with a $16.5 million budget and a sizable campus that includes three performance spaces. Schmitz said the key to their success has been sheer, unadulterated ambition, which originated with all three founders, Gary Sinise, Jeff Perry, and Terry Kinney. A common sentiment from both Schmitz and Perry was the idea of celebrating the past while also rethinking the company for the next twenty years.

The leaders spoke of two different ways that they are trying to push for evolution of the current business model. The first was a tight focus on increasing diversity in meaningful and authentic ways. Schmitz and Perry discussed the goal of creating diversity that encompasses the entire life cycle of the organization: the board, staff, ensemble, and the work on stage. They are keen to diversify in terms of age, gender, and race to make their staff and casts reflective of the diverse content they program.

The second evolution conversation was about growing their physical campus and performance spaces. Steppenwolf is currently engaged in a significant capital campaign in order to fund the construction of a building that would house a brand new 400-seat theatre-in-the-round.

Steppenwolf Theatre Company is continuing to leverage their ambition to position themselves as a leading innovator in the nonprofit regional theatre community. The talent, tenacity, and leadership of both David Schmitz and Jonathan Berry are instrumental to the organization’s success and their candor and generosity towards the students made for an exceptional conversation and experience.