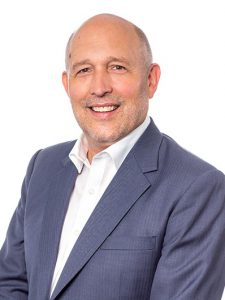 Before becoming the executive director of the Joffrey Ballet, Greg Cameron worked for a variety of museums, including the Museum of Contemporary Art Chicago (MCA) and the Art Institute of Chicago.

But before all that, he founded a different kind of museum… in his childhood basement.

As a kid growing up in Chicago’s western suburbs, Cameron exhibited souvenirs his grandparents brought back from vacations – model Eiffel Towers, for example – and charged his neighborhood friends admission so he had some pocket change to buy Jolly Ranchers. His older brother had a boa constrictor that would sometimes make appearances.

“We were a very eclectic museum,” Cameron said with a laugh during a recent interview. “It wasn’t the Art Institute. It was more the Field Museum meets Brookfield Zoo.”

The experience marked the start of Cameron’s long, successful career in the arts, which he will be discussing at the next MSLCE Speaker Series event on Nov. 30 at 5:15 p.m. Though Cameron has always loved the arts, he knew from the time he was in middle school that he was not meant to be a professional artist.

“In 6th grade I realized that even though I knew the words, I didn’t have a good voice, so I was not going to be an actor,” he said. “ I was also a failed clarinetist – my parents were happy when I quit because the sound used to be painful. The dog would howl when I played.”

So instead of performing the arts, Cameron has made a career out of organizing and orchestrating them. In addition to working in a series of development roles at the Art Institute and the MCA, Cameron has also worked as the Chief Operating Officer at WTTW/WFMT, one of Chicago’s leading public media organizations. Cameron, who began his career as a Development Coordinator for Chicago’s Department of Cultural Affairs and Special Events, has devoted his professional life to this city. The city seems to have appreciated his loyalty as, more often than not, Cameron has been sought out for the different roles he’s held.

Cameron attributes these opportunities to the fact that he has always devoted himself to the job at hand, which means he’s consistently left a good impression with stakeholders in Chicago’s arts community.

“What’s moved me along is loving what I do and doing the best possible job I could do,” he said. “You work hard and you get to know people.”