After Catching the Theatre Bug, Chad Hewitt Aspires to Manage a Theatre Company 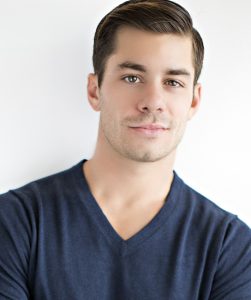 Chad Hewitt is drawn to theatre more than other art forms for one simple reason: it’s one of the few remaining forms of creative expression that can only be enjoyed in person.

“Theatre is the last artistic platform where you can’t use your phone or computer to experience it. You have to be present for it,” Hewitt, a new MSLCE student, explained. “If you watch a video or photograph of theatre, you’re not experiencing what it was designed for. That specific experience will never happen again.”

Hewitt got what he calls “the bug” for theatre when he was a 7-year-old living in in Ohio. His parents enrolled him in a summer program in music, and that started him on a quest to participate in plays and improv.

“I was getting laughs from the audience that bug just bit me,” Hewitt said.

However, it wasn’t until Hewitt got the opportunity to work as an assistant artistic director for an original works theatre company that he felt like he’d found his calling. It’s why he now aspires to be a producer for a professional theatre company or television show.

“That was rewarding and challenging,” Hewitt said of the experience. “I had my thumb on the pulse of both how the actors felt about things and how executives were handling them.”

Hewitt hopes the MSLCE program will help him learn more about how theatrical productions are financed and understand the other economic aspects of running a creative enterprise.

“Not being a business person, I hope to gain an understanding how shows are financed,” Hewitt said.