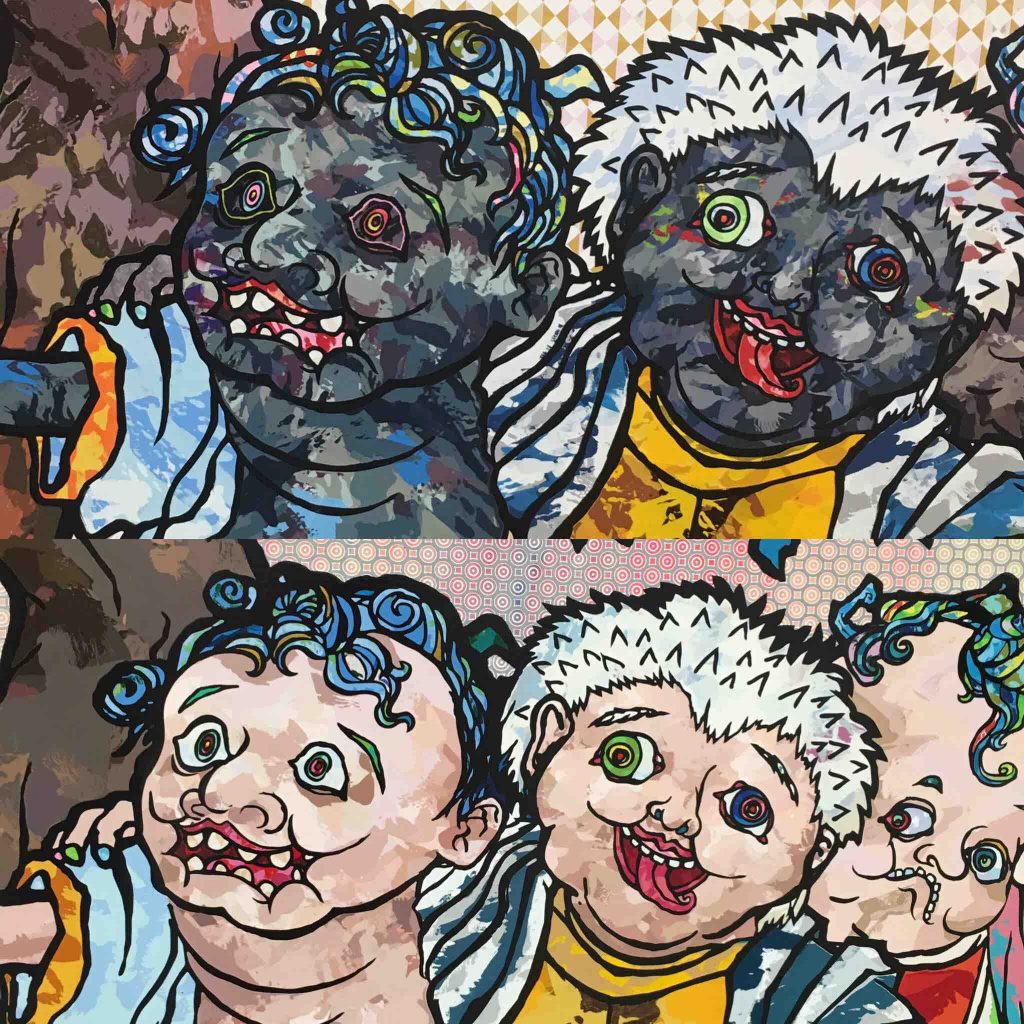 As a social media intern at the MCA, not only should I understand and appreciate contemporary art, I am also obliged to convince other people that they should at least take a chance and look at contemporary art on the most highly-consumed media platforms. But most people around me hate the idea of even glancing at contemporary art. So, I feel compelled to step out of the virtual world and take as many people as possible to the museum to see contemporary art in person.

Takashi Murakami’s show The Octopus Eats Its Own Leg at MCA is a good and fun start for the contemporary art environment. To be 100% honest, I am not a big fan of the work he has created, but I am still able to understand the message and the value he conveys through his mammoth-scale paintings and sculptures with myriad figures and colors. Here is the point I want to prove: in terms of contemporary art, trying to understand is more important than liking it.

I was not sure where this sense of responsibility comes from, but I do sense the pressure I put on myself to be the “evangelist” of contemporary art. Fully equipped with the knowledge from the catalog, the curator-led tour, and all my Buddhism memories with my grandmother, I was ready to accomplish my task of exposing more people to contemporary art by never ceasing to talk to the confused faces of the people I took to the exhibition.

Things did not go exactly as I expected, because in my “ambitious” plan I was never hoping to see any spark between them and any specific piece in the exhibit.

The first friend I took to the museum is a typography maniac.  He spent most time in the room which presents the making process of the arhats painting (an arhat is Buddha’s student, travelling around the country to save and heal people.) The question he kept asking me is, “How can they always get the right color on the right space when applying silk-screen many times on such a large scale canvas?” He told me that his own silk-screen failures in the past made Murakami’s teamwork almost magical.

Then, I took another friend there. She is a Catholic, but born and raised in a region where most people are Buddhist. She was also interested in the 100 Arhats and 69 Arhats paintings, but out from a religious perspective. She reflected after hearing the story that Murakami created as many arhats as possible, which was far beyond the 16 arhats tradition, to represent his wish that the Japanese could have more help after the Fukushima earthquake and tsunami. She was contemplating an ultimate question: who creates the “god” in Buddhism? She knows very well where the god comes from in the Catholicism and believes in that. There began an unavoidable comparison in her head between the two religions until the moment she stepped out of the gallery. She was also flooded by memories of her struggle with religious choice as she was growing up.

The third person I came took to the exhibition was a math PhD student at The University of Chicago. She is definitely the smartest among all my friends, but does not have a special interest in art. As we were reviewing the evolution of Murakami’s alter ego figure Mr. DOB, she stopped at the first three paintings, where Mr. DOB’s shape was deconstructed. She blurted out “Is this Klein’s Bottle?” And the title of the three paintings happened to be Klein’s Pot! She then explained the concept of Klein’s bottle to me very patiently, but I was still far away from understanding. Then, she closed our Mr. DOB chapter by saying: “Never mind. Klein’s bottle is now more like the conceptual art, but not mathematics anymore.”

Though I was fully prepared for every aspect of the Murakami show, since I hadn’t used silkscreen before,  I had never paid attention to the technique; though I accompanied my grandmother to the temples all the time, as an atheist, I would  have never gone that deep into the study of a religion, not to mention comparing one to another. Though I might apply the shape evolving of MR. DOB to Murakami’s superflat theory, I will never guess the title of the work exactly right for the first time, because I had never heard of Klein’s bottle.

I can then see the reasons why I feel the burden to invite others to see contemporary art. I believe that everyone can find one moment of enjoyment or connection in contemporary art and I hope to share this subtle but wonderful belief and feeling with anyone else. You will always be surprised by how different people with different backgrounds respond towards the same work. Instead of giving a never-ending lecture, my best role could be the catalyst of others’ responses. Instead of being stressed out, I should enjoy the delight of waiting and observing.

Contemporary art is our life. And life will lead you, at least, to understand our life.