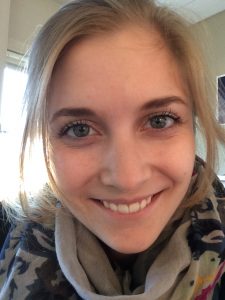 Claire Conard was hooked on theater after her first performance in the musical Annie while in middle school.

“I was always interested in being the center of attention,” she revealed.

While she has been in many shows over the years, her interests have now shifted from being on stage to being behind the scenes as she hopes to become an executive director for a theater company.

“To play such an important role in creating art would be a dream come true,” she said.

Conard’s previous internships in fundraising departments at theatre companies—specifically the Milwaukee Repertory Theatre in Wisconsin and the Young Actors Theatre in London—sparked this new interest, as she was able to see the administrative operations. She notes that most of her professional experience has been in fundraising as she currently works as assistant director of annual giving at her alma mater.

Although she has enjoyed these positions, Conard said she is now ready to make a career change. “I knew I wanted to get back into something that was more creative and artistically focused,” she shared. “I want to support the work that I love from the business aspect.”

As an undergraduate at Lawrence University, the theater arts major and government minor co-founded the Greyfell Theater Company along with 22 of her peers during her senior year. This experience allowed her to hone the skills that she already had and also learn about areas where she could gain more proficiency. As such, Conard is looking to expand her knowledge of finance and law during the MSLCE program.

“I want to be an effective leader in the arts,” she stated.

While performing will always have a place in her heart, Conard now wants to focus on putting all of her energy into behind-the-scenes work. She appreciates classic pieces of theater but envisions directing a theater that showcases new writing and new artists.

She explained, “For me it is about providing a place for artists to have a voice.”