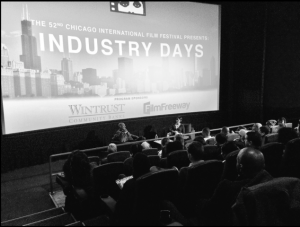 The Chicago International Film Festival took place Oct. 20-23 in Downtown Chicago. MSLCE students had the opportunity to attend the festival’s Industry Days, special events and presentations designed to highlight the inner workings of the film industry for students and guests.

The panels we attended were intimate and diverse. Two panels in particular stood out: One on the art of comedy writing and surviving in the business featuring Rachael Mason (The Second City, moderator), Jim O’Heir (Parks and Recreation), Chicago’s David Pasquesi (Curb Your Enthusiasm), and Michael McCarthy (Saturday Night Live).

“The writers room is like this hidden, secret thing. It can be difficult to see what opportunities are available,” said McCarthy.

All of the panelists emphasized the need for more diversity not only in the casting of actors but also in the writers room. TV writers are hired more through networking and relationships than through open calls. Thus, the path to diversity can be a slow one since head writers and producers repeatedly hire people who are similar to themselves.

The second panel I found the most enjoyable was the “Hollywood Dealmaker: A Conversation with MACRO’s Charles D. King on Producing & Packaging Films.” I had been advised by Jonah Zeiger, Associate Director of EPICS and MSLCE professor to research King in advance based on my interests in being a showrunner. I was eager to hear his insights on film production for movies like Denzel Washington’s Fences that his company MACRO is currently executive producing along with Paramount Pictures. For Fences, MACRO was an instrumental leader in the financing, script development, and production coordination.

King moved to LA after law school with no job, only his faith and a vision. He worked his way from the mailroom of the William Morris Agency rising in the ranks to eventually become the first African American Partner. When asked how he managed to make the leap from top Hollywood agent to CEO of MACRO, King credited his ability to focus on a long-term goal, be a man of faith, and family support as the key to his success.

My time at Industry Days was an up-close and personal immersion. I was able to investigate new internship opportunities with companies like MACRO and learned more about how writers and actors interface with a production team. With my web series Art is Charisma premiering in January 2017, I am making the effort to learn as much as possible about what it takes to be a showrunner, lead a team, and make quality content.