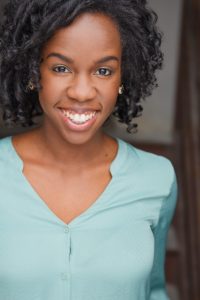 Lauren Vernea has headed her own theater and production company for three years but is now looking to increase her business acumen in order to be the CEO of her company full-time. “I want to be the best arts leader and push my organization forward,” she stated.

Vernea has performed at over seven theaters in the Chicago area including City Lit Theater, Child’s Play Touring Theater and Theater Unspeakable and is currently in a show at Quest Theater Ensemble. She has also served in administrative roles at Steppenwolf Theatre and Congo Square Theatre. But her company, Cape Coast Dream Productions, is where her heart is. Vernea co-founded the company with her college friend out of a “need to give actors and artists of color an outlet to work, get experience and do quality multifaceted work.”

Vernea sang in talent shows and in her church choir growing up but didn’t take performing seriously until her drama group in high school where she realized “this is what I want to spend my life doing.” The Southern Illinois University, Carbondale alum majored in theater performance and minored in political science. She was president of the drama club while in school where she discovered her interest in producing. “My leadership path and my artistic path combined,” she said.

Although she began her career as a performer, Vernea saw more opportunities as a producer. Now, she hopes to do both. “I want to continue acting, writing, and producing films, theater, and music,” she said.

Vernea is currently producing her own musical web series titled Art is Charisma. She stars as the lead character who is a singer failing to balance her life while living in Chicago. The self-taught producer didn’t go to film school and has been working on the series for a year. She noted that it is a lot of “learning on the spot.”

“It’s good to have this experience on my own versus at the expense of other people,” she shared. “Now I know how to put together a film.” Vernea plans for the web series to be available on YouTube and Vimeo soon. She is also anticipating a second season.

Given her interests in different industries—film, theater and music—she was drawn to the interdisciplinary aspect of the MSCLE program. “The program’s curriculum and my professional goals are in alignment,” she shared.

Lauren is such an inspiration!