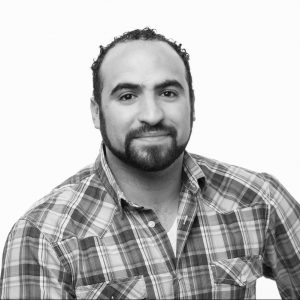 Luis Perez is interested in nonfiction, but he’s open to the format.

“I really want to start a company or work for a company that focuses on nonfiction work in multiple mediums,” he said.

The MSLCE student has learned from experience that nonfiction storytelling can take many forms. He’s worked for WBEZ, Chicago’s public radio station. He’s taught workshops for how to make radio to community members. He’s acted, and he’s helped run live storytelling events. As he puts it, Perez has done “a little bit of everything.”

Perez is specifically fascinated by the way different creative forms feed off of each other while continuing to coexist.

“First there’s dancing, that’s awesome, then there’s a play, oh that’s cool, then they pull these together and there’s musical theater,” he said. “You’d think that would be an evolution and plays would no longer exist or just dancing, but these things all exist together.”

Now, he’s beginning the MSLCE program, and he’s hoping to find more opportunities to fuse his favorite creative forms together.

“I would love to have a job where I’m helping people who are creating things,” Perez said. He thinks he would make a great VP of production or programming or content development. He wants to advocate on behalf “of the people making the stuff.”

He hopes the MSLCE program will teach him the skills he needs to be a better advocate on behalf of the artist. It’s one of the reasons he’s so excited to begin.

“There’s a lot of great work being made not being seen by anyone, and part of that is because the people who are good at business are not good at art and the people who are good at art are not good at business, and that’s why it’s good this program is bringing these people together,” he said. “This program for me at least… it’s supposed to fill that gap.”