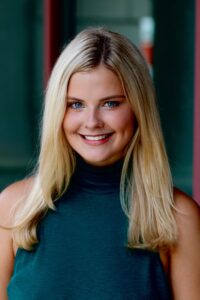 Maddie Schmidt
BA in Theatre Minor in Creative Media, The University of Alabama

Experience: I come from a performance background so most of my experiences are centered around the performing arts. When I think of my most significant moment, immediately I think of The Second City’s Comedy Studies Program. Comedy Studies allowed me to grow and nourish my skills in comedy writing, performance, and improvisation.

Ideal job in 10 Years: To continue my passion for comedic storytelling by working as a Television and Film Producer. I want to use comedy as a medium to showcase underrepresented points of view, eccentric perspectives, and ultimately bring people together through the universality of humor and laughter.

What led you to enroll in the MSLCE program at Northwestern? I was drawn to the MSLCE program because of the opportunity to nourish the more creative side of my myself while simultaneously learning the business side of the entertainment industry. I was also attracted to the idea of studying alongside students of all different creative interests and backgrounds.

If you could have lunch with anyone person (living or dead) who would it be? Phoebe Waller-Bridge because she is actively defining what it means to be a woman working in the entertainment industry…and because she is an absolute legend who quite simply, seems like one of the coolest women in the world. It would be an absolute dream to pick her brain.

Where are you from? Mandeville, Louisiana, United States