Finding the Right Niche within the World of Entertainment 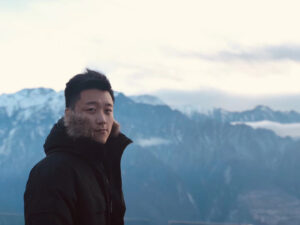 A journey to find his true career passion has taken Charles Wang ’20 around the world. Following his BA in Arts, Entertainment, and Media Management at Tongji University in China, he came to the United States to explore new opportunities.

After attending New York University for a year, he decided the technology management program he had selected wasn’t a good professional or academic fit, so he transferred to the University of Southern California for a fresh perspective—and to study public policy analysis.

“That still wasn’t what I wanted to do,” says Wang. “I just couldn’t live with it, so I started trying to find internships so I could get myself into a professional environment and feel what it’s like to be at work.”

He found an opportunity through a colleague in Santa Monica who worked with YouTube, and Wang joined the team in 2018 as the global affairs coordinator. He helped move Chinese KOLs (key opinion leaders) onto the platform with a goal of gaining traction in the United States.

As he dug further into the work, he was also edging closer to what he loved: working in the media and entertainment industry. While Wang was learning the ins and outs of working with video, he also realized that he enjoyed communicating with people and helping them improve the quality of their content.

“Ever since I was in middle school, I’ve liked to watch all kinds of videos, TV series, and films,” he explains. “That background put me in a position to have a little more experience in how a real video should look and feel.”

He decided to search for a graduate program that would help him get to know the industry better—and faster. After discovering Northwestern’s MS in Leadership for Creative Enterprises, he quickly decided it was the right program.

Wang also appreciated the diversity within not only the curriculum, but also the faculty and student body. Because the coursework offers several perspectives and represents many industries, it helped Wang narrow in on what he enjoys most. “I knew I couldn’t choose which piece of the pie was my favorite unless I got to know all sides of the industry—from law and business models to economics.”

And by working with classmates who came from filmmaking, TV, theatre, music, and entertainment, he says he was able to better identify his own skills and strengths. 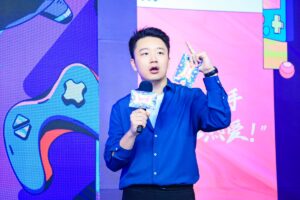 For Wang, Laverne McKinnon’s Power of Pitching & Persuasion was an experience he’ll never forget. It helped him clear his mind and explore different ways to communicate his ideas. “I know some students who wanted to get into this program solely because of this class—and it definitely stands up to that reputation.”

He also credits the External Programs, Internships, and Career Services (EPICS) team, which helped him think through what he wanted from his career by offering seminars and events on everything from résumés to finding internships. EPICS also improved his networking skills—something he didn’t even realize was possible. “I discovered that networking isn’t something you’re either good at or you’re not,” he explains. “It’s a skill you can train for and improve on.”

After earning his MS in Leadership for Creative Enterprises, Wang was offered a senior content manager position with Tencent, an internet-based platform company based in China.

He now works for a small division within Tencent; his team gives visual identities to Chinese screenplays, whether they’re animation, a TV series, short videos, or feature-length films. What he loves most about his role is the chance to build something from the ground up every day—and trying new tactics to see how users react.

“My job is all about creativity,” Wang explains. “There are no books to follow or rules to obey. We’re in the early stages of brainstorming what kinds of strategies to use. I would’ve never had any idea about how to do this if I hadn’t been in the program. It helped me get this job. And I’m surprised at how much of the knowledge I use from class. I never expected that!”