MSLCE Student Taking That Next Magical Step Toward the Future 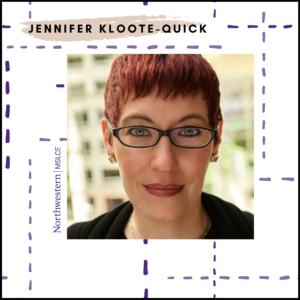 After nearly a decade-long relationship with Walt Disney World, it would be fair to say that Jennifer’s professional journey has been nothing short of magical. A Disney girl at heart, she began this partnership in 1996.

“ I started in the Disney College program within the attractions department,” she explains “ I was a theater major at that time and worked in character development. The end of this program really kicked off my full-time journey at Disney.”

Jenni discovered that while character development as an actor taught her immensely about working with different personalities, it made her realize that she did not want to be a performer. She was still trying to figure out what she wanted to do professionally when a chance injury while performing in costume landed her work in the Walt Disney World offices.

“ I got to work with managers and people in leadership positions and I was really intrigued by that. I had never gotten to experience anything like that. My time here showed me that this was something I could do,” she elaborates —  and work she would eventually return to a few years later.

During her time at Animal Kingdom, she developed an interest in science and started teaching a ‘Grand Expeditions’ course. Her passion for science eventually developed into a career aspiration and she started working towards getting a teaching degree. She graduated from Rollins College with a degree in theater and a minor in secondary education. A few years into being a teacher she transitioned back into a role with Disney as a Guest Talent Coordinator at Disney Performing Arts. She describes this role as what she considered to be the ‘perfect sweet spot’. The job was soon made redundant, however, and Jennifer was pushed towards a more managerial role.

“Disney does what they call ‘Casting Calls for Leadership Positions’ and I went in and interviewed,” she elaborates, “and I went into a leadership position at The Magic Kingdom as a Character Manager.” Here she was able to do a lot of things as a manager that she wasn’t allowed to do as performer early in her career.  She was there for about nine months before heading over to the Disney Events Group. While she didn’t intend to be in this position for more than six months, she ended up staying there for three years. This was probably the most transformative experience of all the time she had spent at Disney. She got to experience every part of the customer experience journey with a mix of performance and management.

Before joining the MSLCE program, Jennifer made a few more quick transitions, including roles at the Lincoln Park Zoo and Grand Rapids Public Museum. She worked as an Expeditions Trip Manager with National Geographic before the pandemic hit and the tourism industry came to a halt. “When the pandemic hit I started thinking of what I wanted to do and I knew I had to do something new and find my place in the world,” she explains. When asked what prompted her to join the program she said, “it was just one of those moments you know, when lightening strikes and you just know.”

She’s been a risk taker her entire life and her intuition hasn’t let her down yet.