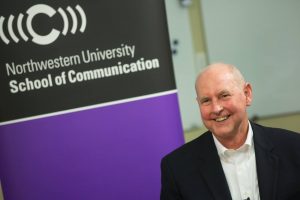 As Webster prepares to retire at the end of the summer, he’s experiencing trying times once again: His MSLCE course—Understanding Media Markets: Users, Makers + Metrics—has moved online for the first time amid the COVID-19 pandemic. “It’s certainly a curious bookend to my life as an academic,” he says.

After he graduated in 1973, Webster landed a job in New York City conducting focus group testing for a television series focused on health (the show aired in 1975 and didn’t last long). From there, he attended graduate school at Indiana University to study audiences and program choices. “Ever since that time, I’ve tried to figure out what attracts an audience to some things and not others.”

Working with Indiana University faculty who were attuned to the industry, Webster and his team had access to respondent-level TV viewing data (tracked in paper diaries). Using that information, Indiana University examined viewing behaviors to understand the role that preferences play in program choices. “Actual choices have very little to do with people’s preferences,” he says, “and a lot to do with the way in which the media environment is structured.”

Fascinated by his graduate-school experience, Webster began his academic career soon after. In 1986, he accepted an offer from Northwestern University to teach courses in media law and policy, audience research, and media industries.

When the MS in Leadership for Creative Enterprises launched with its focus on developing the next generation of adaptable leaders for arts, entertainment and media , it was a great alignment with Webster’s research and insights on understanding media markets, which can be found in his recent book: Marketplace of Attention: How Audiences Take Shape in a Digital Age.

For the past few years, his course in the MS in Leadership for Creative Enterprises program has taught students the three factors they need to consider in order to understand the media marketplace:

“The world of media has become increasingly complicated,” he says. “What I bring to the table is a sense of perspective. Because I’ve been studying it for a long time, I can offer a particular framework for thinking about and understanding what’s happening in terms of media and data.”

When Webster first began his career, cable television was the new technology to study. Many found it fascinating because it expanded the number of viewer choices. Today, however, there are many more choices—and they’re all delivered on demand. Virtually every media company uses data to try to manage their audiences.

“Netflix is fabled for its use of data,” he says. “Supposedly, they use it to develop and greenlight television series or movies they know audiences will love. Data pervades the entire digital marketplace. It affects what gets produced, what gets consumed, how audiences are commodified, and how advertising is targeted. Nearly everything can be targeted with incredible and somewhat frightening precision.”

As Internet of Things and big data become integrated into our lives, Webster says the potential for data collection grows every day. “Almost everything is observable now, whether we’re watching TV, using a smart thermostat, or talking to Alexa,” he says. As digital-integration grows in response to social-distancing measures in response to COVID-19, these matters become even more central to our lives.

As data collection grows, he believes that privacy issues will also take center stage. “It hasn’t happened much in the United States yet, but the government is beginning to protect data and limit its use in Europe,” Webster explains. “Whether personally or professionally, students are going to be living in this digital, data-driven world. It’s full of opportunity and peril. The more you can understand how that world operates, the better prepared you will be to prosper and protect yourself.”