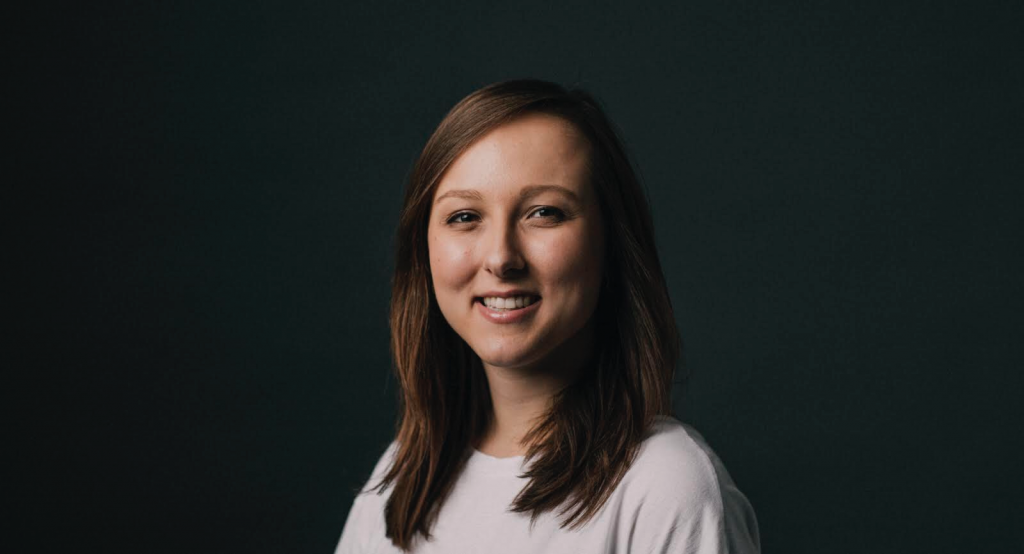 A passionate writer and storyteller, Samantha Sartori ’20 loved being part of the television production program in high school. She excelled at working on stories for the educational-access channel and filming clips for district broadcasting.

As she studied journalism with a business minor at Loyola University, she realized she not only had a knack for broadcasting—but also writing for the ear. “It was a skillset I didn’t realize existed,” Sartori says. “But writing something for people to listen to is different than traditional writing.”

As she earned her degree, she interned at WGN Radio and the Illinois Broadcasters Association, which placed her at WGN-TV with segment producers and entertainment. “I worked with Dean Richards, taking my first steps into the news world on the entertainment side,” she explains. “I loved segment producing and being behind the scenes.”

Through the connections she built at WGN-TV, she landed her first job as a per diem writer for the station after graduating in 2015. “I worked crazy shifts: overnight, evenings, and weekends. I was eager to learn more so I started producing for sister station CLTV.”

After getting some experience under her belt, Sartori noticed production gaps at WGN-TV. “If someone was out sick, because I was per diem, I could get those production hours and learn more. I didn’t have to be just a WGN-TV writer, CLTV producer, or WGN-TV producer. I could do all three.”

During her last few months with the station, she produced the WGN-TV Morning News—which is exactly where she thought she wanted to be. “As soon as I stepped into that role, I realized it wasn’t the job I wanted,” she says. “It wasn’t the right fit for me.”

Eager to explore journalism beyond television production and news writing, Sartori wanted to find new ways to apply her skills. So she moved on to a video production agency that specializes in branded content, brand anthems, mini-documentaries, and entertaining commercials. “I knew news producing: line producing, stacking a show, and deciding which stories go on the air,” she says. “But this was a different kind of producing. I was given a creative concept and had to execute it.”

She immersed herself in the work and produced all types of content, from ads and scripted narratives to informative animations. But, still, something was missing—especially when it came to the business side of her work. “I didn’t learn about that in undergrad,” she explains. “I wanted to know how creative companies operate.”

This curiosity led Sartori to Northwestern’s MS in Leadership for Creative Enterprises (MSLCE) program, where she’s just wrapping up her first quarter.

Like many MSLCE students, Sartori first considered an MBA—but knew she would regret a degree that didn’t involve creative work. “When I came across this program, every class was something I was excited to learn about. I hadn’t seen anything like it.”

She’s also confident that the MSLCE program will help her forge a future career path—whether that involves news operation or another kind of truthful storytelling. “I’m passionate about why and how people’s stories matter, especially in terms of social justice and social change.”

Environmental sustainability is another passion project for Sartori (she even considered studying it as an undergraduate). Her ideal job is one that brings her creative and business sides together, along with her interest in the environment—whether that involves environmental storytelling or working on film sets to implement sustainable concepts and processes.

“Northwestern’s classes have been applicable across all types of industries, which is great since I don’t know exactly which I will choose,” she says. “While MSLCE is focused on creative, it takes a broad approach that applies to everything within the industry.”

As a hands-on learner, Sartori also appreciates the opportunity to connect with classmates and professors beyond classroom material. “Most industries are about networking,” she says. “The chance Northwestern gives us to have face-to-face interaction and networking is one of the benefits of being on campus. You have opportunities right in front of you.”