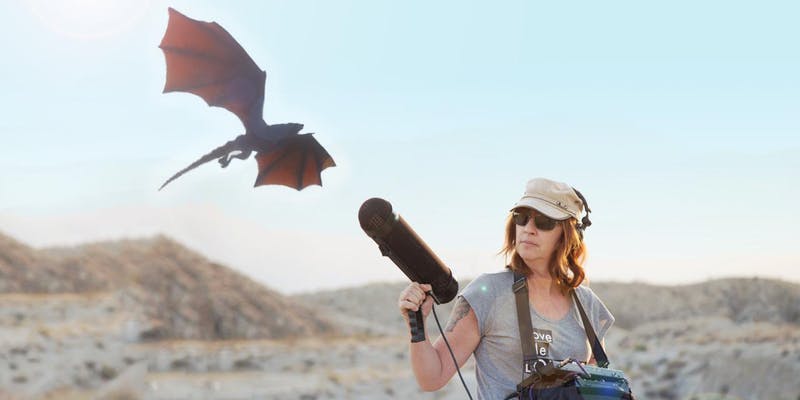 Emmy-winning sound designer Paula Fairfield has a lot to say about a lot of things. With each example she gave from her storied career, she hit point after point about what it means to be human, finding solace and healing through your work, and letting your “freak flag fly” in your chosen industry. It was inspiring beyond a professional sense – she showed that emotion is okay in your work, and in fact, it can make it even better.

In an event sponsored by the Sound Arts and Industries Master’s program, NU lecturer Calum Walter led a discussion with Fairfield, who most notably served as Sound Designer for cultural juggernaut Game of Thrones. She discussed her informal training in the field and working her way through a male-dominated industry into this post with reassuring aplomb. She detailed the familial struggles she faced, including the passing of her father and siblings and her “devastating” divorce, as she was appointed to the Thrones position. Beyond changing her life, the show “let [her] fly” and became her vehicle for healing as she found her voice. This emotional connection to her work and how it impacted her personally was truly touching to me – as someone who relates emotions very deeply to art, it was encouraging to see someone so passionate aligning lessons learned in life to the lessons learned in professional work.

The event itself was timed impeccably, just days before the final episode of Thrones was set to air. Fairfield discussed in detail several pivotal scenes that she worked on, including a scene in season 3 involving a certain dragon and his Khaleesi. In describing the dragon (Drogon)’s relationship with his dragon mother (played by Emilia Clarke), Fairfield drew inspiration from real-life animals, which has become a huge inspiration to her work going forward. She is particularly invested in “emotional storytelling sonically,” citing a recent scene involving Arya Stark (played by Maisie Williams) wandering through debris. Fairfield discussed how she sonically pinpointed certain areas, drawing the audience’s attention to each aspect to create a fully immersive experience. Those experiences, she explained, “make people lean in [and] feel something.”

One of the most impactful parts of her hour-plus long Q&A involved her discussion of women in Sound, a mostly male-dominated industry. She praised the number of women in the audience, calling them inspirations in the realm of encouraging and sharing stories for more women, people of color, and other underrepresented individuals. While she defended widely criticized Thrones show-runners David Benioff and D.B. Weiss for their utilization of women behind-the-scenes, she also detailed her struggle to make her own path in the mostly male industry. She described approaching directors, giving herself work and rising each step of the way through hard work and commitment.

Additionally, she encouraged everyone to “[create] your own set of rules for what you’re doing” – coming from a place of working from the ground up, Fairfield made clear that it is hard work and passion that makes the difference.

Hearing Fairfield’s words was an inspiring way to kick off my last few weeks of the spring quarter. Plus, I don’t think I’ll ever be able to listen to the dragon sounds in Game of Thrones the same again.