Branding, Broadcasting, and Baseball: Notes from My Externship with the Chicago Cubs 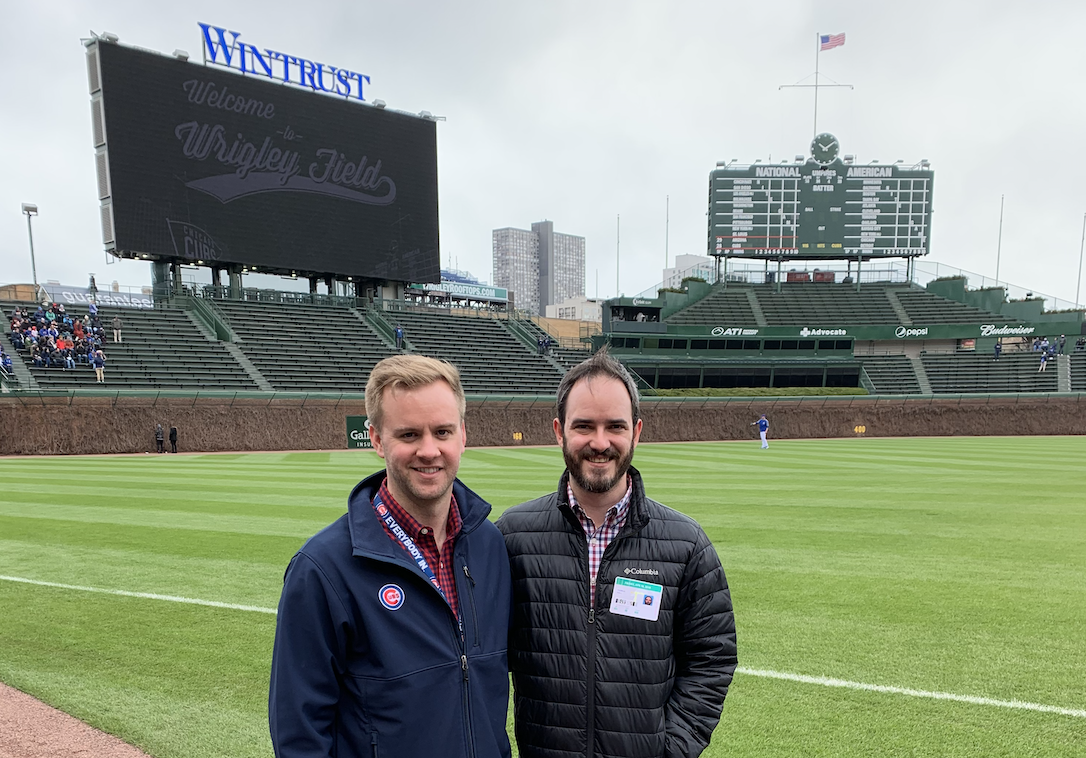 I first heard about the Northwestern Externship Program (NEXT) through the MSLCE newsletter this past December and my interest was definitely piqued. The program, which gives students the chance to shadow alumni for a day in various industries and sectors throughout the country was worth a shot, I figured. So when I saw that an alum was working for the Chicago Cubs, I began working on my application within minutes. I was overjoyed when I found out a few weeks later that I’d be connected with Chris Simonson from the class of 2011.

Chris is currently the Manager of Video Board Operations for the Cubs and Cubs Productions at Wrigley Field. He was brought into the organization in 2015 when, for the first time in the historic stadium’s nearly 100-year history, a 3,990 square-foot LED would be installed to help enhance fan experience at the ballpark. Using the years of experience he gained from working in broadcast operations for Northwestern Athletics and the Big Ten Network, Chris was given a very unique opportunity: to create and oversee broadcast operations for one of the premiere teams in Major League Baseball.

Overseeing video board operations for a major league baseball stadium is a unique job with specific demands, as I learned throughout the day. It’s kind of a flipped version of a televised baseball broadcast in that most of the action in Chris’ control room happens before, after, and in between the action on the field. Because the video board itself is positioned directly in the batters’ line-of-sight, league rules (and common-sense etiquette) dictate that the board should be static when any player is up to bat, meaning no live video or motion graphics should be displayed on the board during those times. 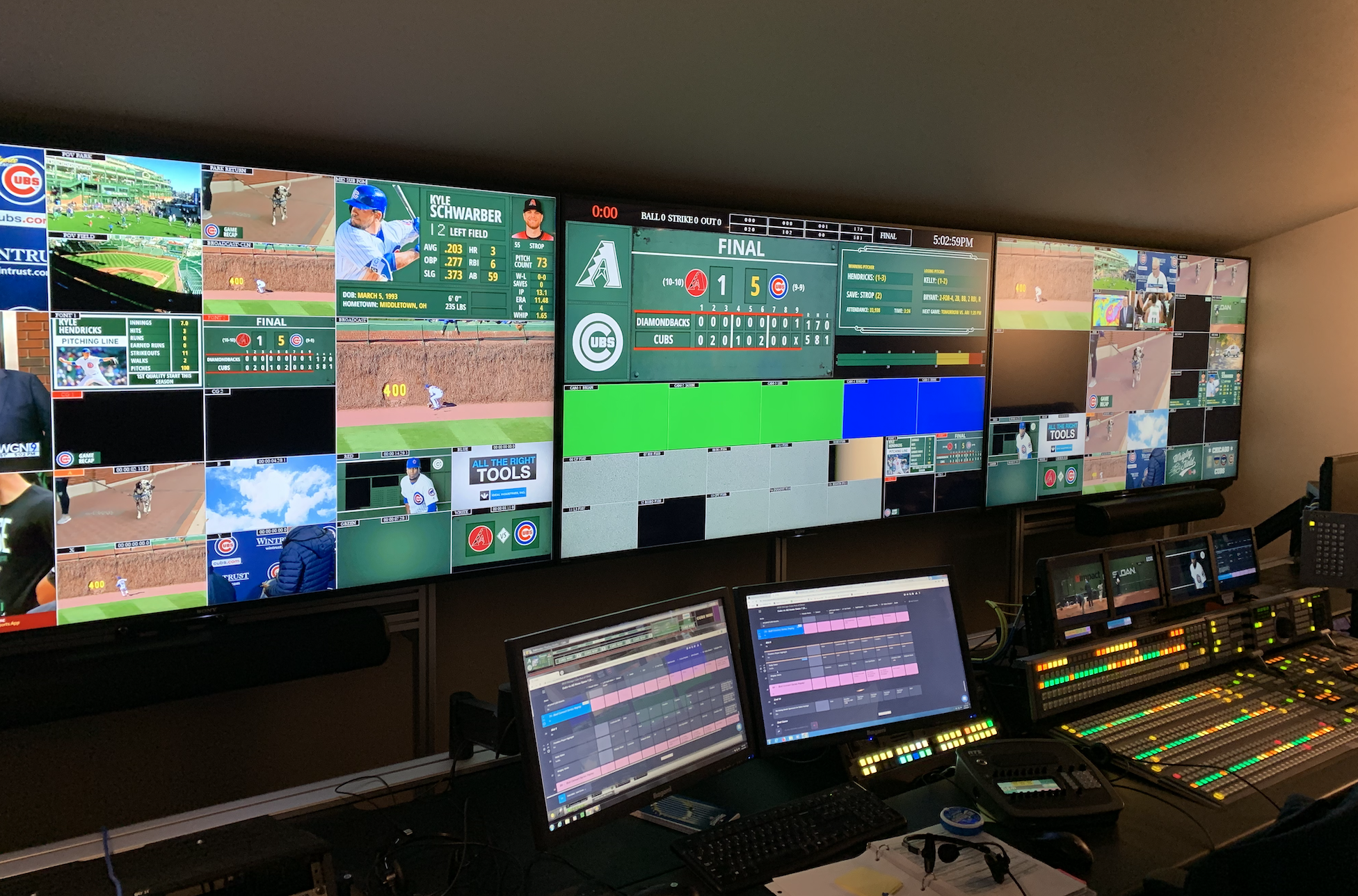 Pre-game, in between innings, and pitching changes represent the bulk of the day’s programming for Chris’ operation. For about an hour before the game starts, Chris orchestrates team members in the studio room and throughout the stadium – from the Public Address Announcer to the Stadium Organist to the Stadium DJ and a crew of roving and stationary videographers – to come together to create an in-game experience so seamless that most fans simply take it for granted.

I, for one, will never watch a baseball game at Wrigley Field the same way again. Before, when I saw content flashing across the screen during games, I enjoyed it, but gave it no further thought. Now, I see that a specific sponsor logo, in coordination with a specific piece of music, and culminating with a pre-produced video featuring Cubs players answering trivia questions is the result of countless hour of preparation and a skillful coordinated approach directed by Chris and his team at Cubs Productions.

Chris took the time, before the broadcast began, to take me all around Wrigley Field,  and see things that many fans could only imagine in-person: the broadcast booth where the legendary Harry Caray called games, a walk across the playing field, a visit to the Cubs’ dugout, and even a trip up inside the stadium’s legendary manual scoreboard.

And, knowing that my interest and concentration with MSLCE was in brand activation and sports marketing, he even took the time to set up a meeting for me with Kaitlyn August, Assistant Director of Brand Activation for the team. This provided me with an interesting opportunity as well, to check my group’s work from Judy Franks’ Marketing Strategies in the Creative Industries class, where we had just completed a case study on the Cubs!

Chris also coordinated a meeting with Brad Nagel, who oversees the Cubs’ Service Excellence Program (SEP), which is a 24-month professional rotation program that helps recent graduates start their career in professional sports. SEP allows a class of entry-level employees the chance to rotate throughout the organization, completing projects and making connections in various departments throughout the team’s front office over the course of their two-year assignment. The meetings with Brad and Kaitlyn rounded out what was already an amazing, comprehensive and busy day at Wrigley, all made possible by Chris and NEXT.

The power of a Northwestern alumni connection was fully apparent for me, and I would recommend any student interested in having a similar experience to register with NEXT today, and participate in the Externship Program as soon as you can. In a year that has been filled with life-changing moments for me at Northwestern, my day with the Cubs ranks at the top. I’m grateful to MSLCE for making me aware of this opportunity, to the NEXT office for setting it up, and of course to Chris and the Cubs for making this a day that I’ll remember forever.