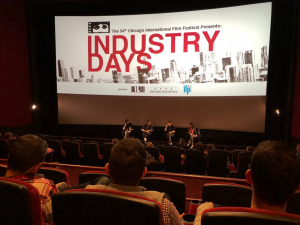 Last weekend Chicago brought the world’s brightest talents to the screen at the 54th Chicago International Film Festival. In partnership with The Illinois Film Office, Chicago Film Office and IFP Chicago, the festival hosted Industry Days alongside a myriad of films, documentaries and virtual reality experiences. If you ever wanted to know how to pitch a concept, distribute your film independently, raise your seed money or even explore the worlds of virtual reality, Industry Days was the ticket for you.

At the “Documentary Storytelling Workshop” we were introduced to the creative leadership at Kartemquin Films including Tim Horsburgh (Kartemquin Films), Rebecca Parrish (Radical Grace), Anuradha Rana (Ring Laila) and Gordon Quinn (Kartemquin Films). Each panelist focused on storytelling for real people, about real issues, and following a “three-act” structure. They encouraged filmmakers to apply for Kartemquin’s upcoming fellowship where students are able to learn from these creators directly.

After creating your work, you need to sell it, right? The next panels were about distribution and fundraising and attracted a sizable crowd. Chicago filmmaker Kyle Henry spoke with Ryan Oestreich (Music Box Films) about his film Rogers Park and his successful DIY distribution strategy. Henry reminded distributers that you “gotta know the territory” and provided several resources to help along the way including the Sundance Creative Distribution Initiative. If you skipped lunch you were likely to have the chance to meet several investors including Ted Reilly (Chicago Media Angels), Eddie Linker (Forager Films) and JJ Ingram. Their panel talked through everything you should know about equity investment and what not do with your budget. 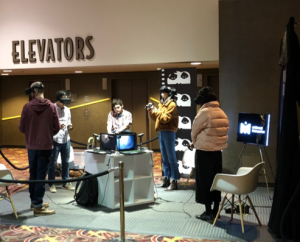 Outside of the workshops, documentaries, and bowls of popcorn, I found my way to the lobby to experience my favorite part of the festival, Midwest Immersive’s virtual reality theater. These films took me through our solar system with Spheres: Pale Blue Dot, convinced me to start a punk band with BattleScar and brought me to tears with Vestige.

For more information about the Chicago International Film Festival please visit their website. Until next time!