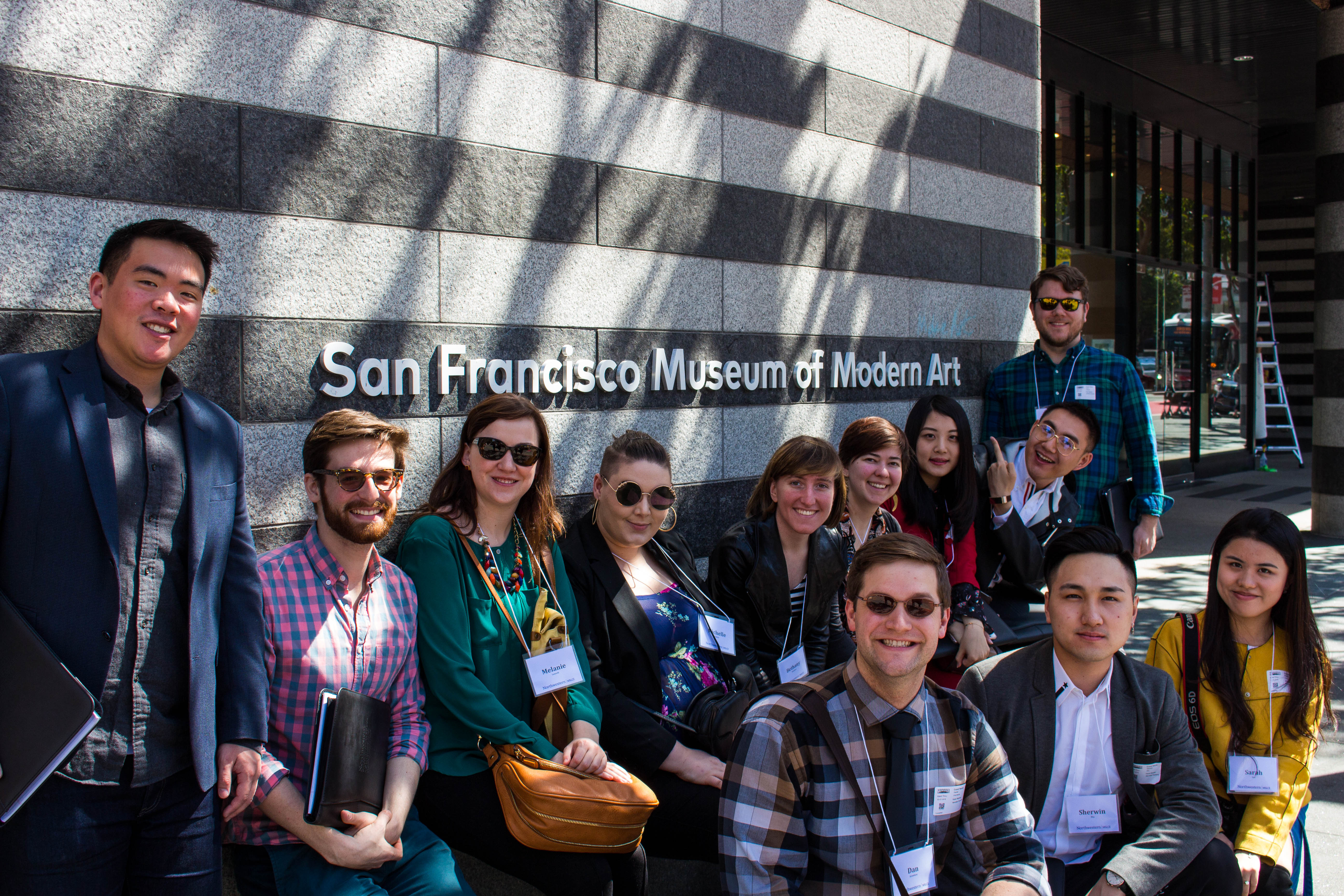 After a delicious lunch at the SF MoMa cafe Tuesday afternoon, we were given a tour of the museum by one of the curators, Sarah Roberts. Recently the SF MOMA added an expansion to their old building that brings the museum to 10 stories high- the top three floors occupied by offices. Roberts explained that the expansion served a dual purpose: create room for more artwork as well as give the community more options to engage with free spaces and performances. After the tour we had the opportunity to speak to a number of their administrative staff about the museum’s goals and challenges. The museum staff were dedicated to finding ways to benefit and dialogue with the San Francisco community at large while working within the constraints of running a large arts organization. It was interesting to see the how all the different departments of the administration worked together to achieve their common goals.
After SF MOMA we headed back to the hotel where we heard from Javier Chen and Casey Baker, two employees at Pandora. We learned about different ways to take care of employees and generate internal company culture. Within Pandora there are employee community groups that build strong networks throughout the company. We also heard about how investing time into creating a strong team and having a vision for your team within the framework of the larger company can help bolster work ethic and make work more fulfilling.

Wednesday afternoon we visited Edelman, a public relations and marketing organization. We spoke with the Vice President, Andy Lutzky, who encouraged us to work hard and be as helpful as possible to those around us. We also learned from Executive Vice President Stacy Sommer about the Edelman Trust Barometer. From extensive research, Edelman has been able to collect data about which sources of information people across the U.S. trust.

On Thursday afternoon we visited Kanopy, a growing video streaming service that aims to provide “Thoughtful Entertainment.” The company sells its product to Universities and libraries in Australia and the U.S. We met with founder and chief executive Olivia Humphrey and learned both about her impetus for starting Kanopy as well as how the company has managed continuous expansion in an industry full of competitors like Netflix and Hulu. It was inspiring to see how Humphrey had identified a problem within educational film distribution and created Kanopy as a response and efficient solution.

Our last visit of the trip was to Berkeley Repertory Theater where we met with Rachel Hull, the Director of the School of Theater. We were given a tour of Berkeley Rep’s two theater spaces, Peets Theater and the Roda Theater. Hull explained that earlier in its lifetime, Berkeley Rep tried to be everything for everyone, but it has since learned to focus in on the esoteric programming it has become known for. She advised us that as a company you should not overpromise what you’re capable of. Hull also told us that cultivating a group of dedicated subscribers is critical to the running of a theater like Berkeley Rep.

My biggest takeaway from the San Francisco trek was that you need to work hard and be dedicated to your passion to work in the creative industries. Find what makes you different from everyone else and hold tight to that, it will be the thing that helps you prosper.