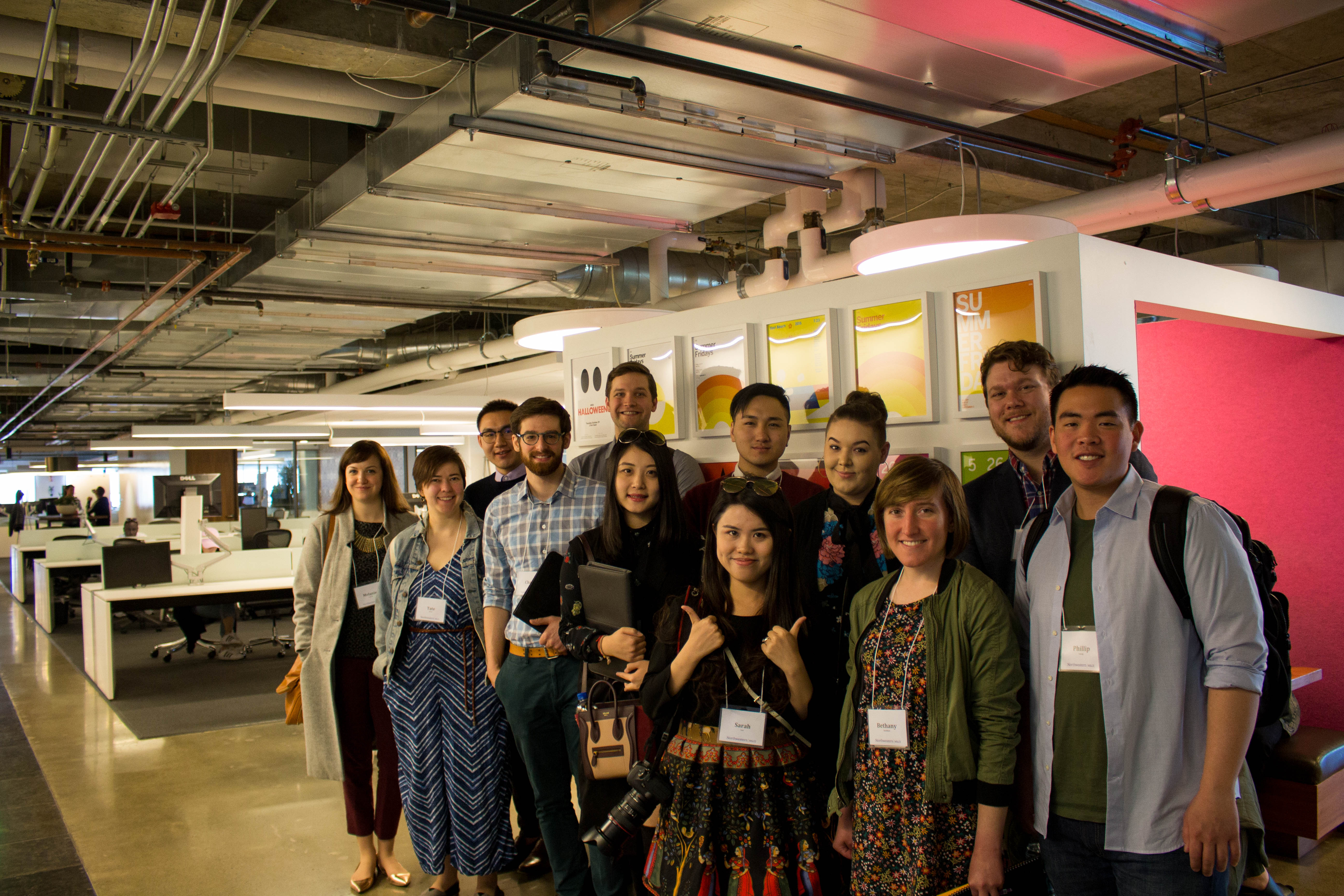 Grad school is a great place to learn valuable skills for the future. The MSLCE program does a wonderful job of providing a comprehensive education to young professionals looking to fast track their careers in the creative industries. However, while classes are valuable, there’s no substitute for examining how those acquired skills can be utilized in the real professional world. The MSLCE program understands this and provides the greatest opportunity for the students to have that experience by taking a trek to a major US city to visit some of the highest profile companies.

The dozen MSLCE students that made the trip to San Francisco took full advantage of the opportunity to build connections and gain valuable insight from top notch creative leaders in the industry.

The trip kicked off with a cocktail event with alums currently working in San Francisco. Two alums from MSLCE class of 2016, Scotty Stieber, and Zach Hyman, introduced the students to the city and touched on their experiences with their transition into the professional world. Both work for companies the students would later visit as a part of their trek. Scotty for Edelman PR agency, and Zach for AKQA digital media advertising.

The first day started with a trip to Lucasfilm, the world-famous production company behind the Star Wars mega franchise. Students were greeted by Lucasfilm’s Director of Talent Development Danielle O’Hare, and Director of International Franchise Marketing Barbara Gamlen. After a video showcasing the special effects work done by Lucasfilm and Industrial Light and Magic throughout the years, Barbara opened up the floor for a Q&A about the workings of Lucasfilm. Students gained valuable information about the process of running a transmedia entity as big as Star Wars and specifically how to approach marketing for the product in various parts of the world. After the Q&A (and signing an NDA) students were treated to a tour of the facilities and explored the vast Lucasfilm Presidio campus.

Day two of the trek started a little lighter, the students were treated to breakfast with Kat Bachert, Project Manager at Oculus Rift. While unable to speak of projects currently in development, Kat offered her thoughts on the uses and future of Virtual Reality and how it can be utilized as a form of art, to reach audiences and inspire empathy, and how it can provide opportunities for people to explore the world outside physical limitations. Kat also provided some valuable insight for those wishing to build a career in the tech industry, the steps and difficulties to doing so, and her winding path that led her to where she is now.

After Oculus, the students made their way to AKQA, self-described as a “digital design agency”, AKQA handles all aspects of digital and experiential marketing for leading companies from multiple industries, including Audi, Levi, Apple, Activision, and Verizon. The office houses close to 300 employees separated into various working stations by project. The students began with a tour of the facility and were amazed by the modern, casual aesthetic of the office. A game room on one side, a ping pong table on the other, an entire kitchen in the middle of the office chock full of snacks. Sitting down with the panel of leaders for a Q&A and through several video presentations, AKQA showed students how they differentiate their advertising strategies by thinking outside the box. Building an entirely interactive Verizon store, where customers could test out fitbits on moving floors, or introducing gamers to a new game through interactive gameplay in the previous one. AKQA also shed some light on the difficulties of working in digital advertising. Clients often ask for completed ideas in a limited amount of time, and the completion of that idea makes the difference for a successful campaign and losing a major client. AKQA demonstrated a phenomenal balance between the creative side of digital advertising, and the business side.

Day three of the trek kicked off with a meeting at Masterclass with Creative Producer Gabe Jewell. Masterclass operates a series of video classes with prominent experts from multiple areas. At Masterclass, Helen Mirren can teach you acting, Malcolm Gladwell can teach you writing, Stephen Curry can teach you basketball. Masterclass is another startup experiencing a great stride of success and are in the midst of a major office expansion. They currently employ close to 100 creatives in an open office space. The students sat down with Gabe, as well as other heads of the company from both administrative and creative departments to discuss the ins and outs of operation. From Gabe, students got an idea of what goes into the process of building a curriculum around any particular subject from conceptualization to release. Having to work around their masters schedules, preventing internet piracy, and figuring out how to translate different subjects into online instruction. “Chess is particularly hard”, Gabe pointed out the difficulties of trying to teach chess via online video as one would normally need to see both the board and the instructor to fully understand the concepts. During the Q&A, students asked questions concerning the future endeavors of Masterclass, will they offer some kind of student/teacher interaction? What subjects will they expand into? How do they differentiate themselves from other companies doing similar projects? Some of these questions are easier answered than others, but it was clear to see that Masterclass is a company to watch in the tech startup sector. They present a perfect example of a company taking full advantage of their technical, business, and creative expertise.