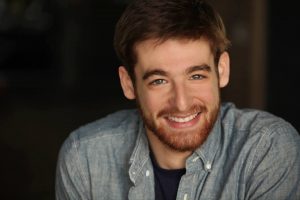 Charlie Wein has been interested in theatre since he was three, when his mother introduced him to it. As a board member of the community theatre in his hometown of Pittsburgh, an actor, and a director, she not only showed him the world of theatre, but encouraged him to take part in it himself.

“She was my monologue coach,” Wein said. “We watched a lot of movies together. We clicked very well and would have conversations about what liked and what we didn’t.”

A current MSLCE student, Wein has spent time as both a stage actor and a director. He appreciates theatre’s ability to “make an impact on people.”

“Theatre forces people to look at the world with a different perspective,” Wein said.

Though he’s acted and directed, Wein prefer directing. He says he’s “too nervous to be a phenomenal actor,” but that nervousness is good when it comes to overseeing and organizing an entire production.

“Some of the best directors are a little more OCD,” Wein said with a laugh,”They make sure little moments are working, and they’ve covered every aspect of the show.”

Wein’s introduction to directing began in college, and has continued since. He’s found that the best way to improve as a director is to just keep doing it.

“The best experience you get is just by directing, and getting feedback from people you work with,” he said.

As a fan of experimental theatre, Wein enjoys working in intimate settings that lower the barrier between the audience and the performane.

“ I want to remove that wall and get the audience fully invested in the theater,” Wein said. “Experimental is the best way to do that.”

After the MSLCE program, Wein hopes to find a job working as a creative director of a theatre, so that he can be in a position to plan shows.

“My main goal is to get a job that allows me to reach a wider audience,” Wein said. He hopes the program will “put me in a position to do something like run a theatre company with more than just my artistic skills.”