A Musical ‘Jack of All Trades,’ Unique DaCosta Hopes to Pinpoint and Pursue an Industry Career 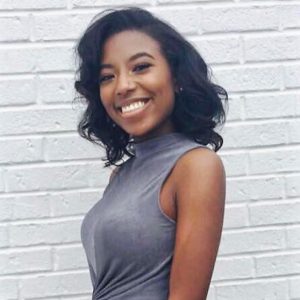 Unique DaCosta has wasted little time getting her creative career off the ground.

The Illinois native and current MSLCE student has always been interested in the music industry, and has taken a variety of steps to enter it professionally. For example, she started an organization called I-NSPIRE in Grand Rapids, Michigan to provide a platform for young women in the community interested in creative expression. She also runs a podcast that she began in college, where she and a co-host discuss hip hop culture and music. And DaCosta sang in a choir as a child, andmade DJ mixes in college.

It’s unsurprising, then, that DaCosta aspires to be a “jack of all trades.”

“I feel like my ideal position would be creative director at multimedia company,” DaCosta said during a recent interview.

DaCosta’s interest in the music industry began with her father, who was a DJ for a reggae band, Jamaican sound system. As DaCosta has gotten more focused on finding her way in the music world, she’s found herself increasingly discussing where women fit into it more generally. Her podcast, for instance, stemmed from a feeling that there was a lack of opportunity for women to talk about hip hop music.

“A lot of women just aren’t taken seriously in hip hop,” DaCosta said. She also suggested that these circumstances are beginning to change. “We’re starting to be seen as equal counter parts… there’s a little bit more of a welcoming spirit. We’re a big part of the market.”

DaCosta hopes the MSLCE program will help her pinpoint a more specific career trajectory from the many interests and skills she has.

“Because I’m going back and forth about wanting to explore everything, I’m hoping to pinpoint exactly what I want to do,” she said. “I’m hoping to expand my knowledge in a more professional sense.”