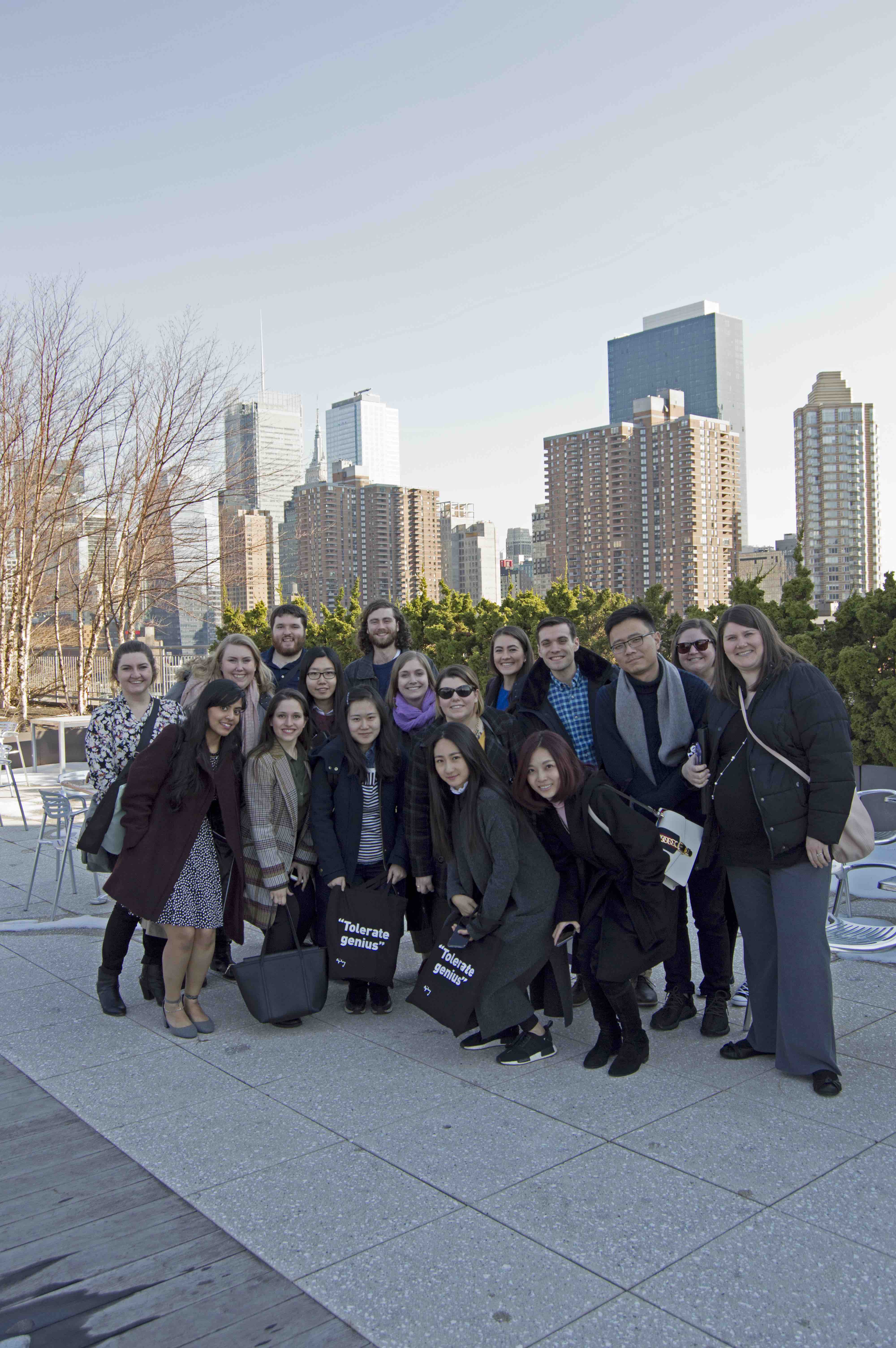 After a rousing first two days in the Big Apple, the students of the MSLCE cohort woke up energized and ready to see what the second half of the NYC immersion trek would bring. They didn’t have to go far, as three interesting guests would visit them in the hotel that morning.

The students were finishing up their breakfast when Barbara Whitman and Tom Casserly arrived. Whitman and Tom shared their insight into the theatre industry through their experience as Broadway producers. The Tony-Award winning (Fun Home) powerhouses behind “Barbara Whitman Productions” described what it’s like to select a play, raise money, and bring it all the way to the Broadway stage. Afterwards, Emily Gerson Saines of Brookside Artist Management provided some insight into the life of a talent agent in New York, and how she used her connections to accomplish major philanthropic efforts for the Autism community.

After an exciting morning, the students were ready to walk over to 53rd street to see one of the most anticipated sites of the trip: The Museum of Modern Art. Jess Van Nostrand, the Assistant Director of Exhibition Programs and Gallery Initiatives, met these future leaders of creative enterprises to talk about MoMA’s adult art education programming. The cohort even got a chance to talk to some of MoMA’s current interns, and learn about their roles, responsibilities, and journey to MoMA. Afterwards, the students excitedly walked through the museum’s many galleries, many stopping to take photo-ops with Van Gogh’s “Starry Night,” amongst many other famous works of art.

After a long day of learning, networking, and exploring, what better way to unwind than in your apartment on the Upper East Side? The MSLCE cohort was very fortunate to be hosted by the generous and welcoming David Lefkowitz, an ‘82 Northwestern Communication Studies alumnus. While enjoying the view of New York City’s Skyline, the Master’s candidates had a chance to network with various Northwestern Alum’s working in the creative industries in New York, including young alumni from past cohorts of the MS in Leadership in Creative Enterprises program.

Thursday, the last day of the trek, set out to wrap up the students experiences with a combination of seminars in entrepreneurship, media, and fine art. Sheetal Prajapati was the last guest to visit the cohort at the hotel. Sheetal’s warm personality instantly connected with the cohort, as she described her journey from artist, to MoMA employee, to her brand new position as the Director of Public Engagement at the Pioneer Works Center for Art and Innovation. Sheetal’s interesting career path piqued the interest of many students, as well as the fascinating interdisciplinary art that she helps create at Pioneer Works.

Team MSCLE headed out for their final set of site visits on the NYC immersion trek on Thursday afternoon. First up was Cumulus Media, an American broadcasting company. Mark Wildman invited the cohort in to talk about radio’s role in the new digital age. Finally, the group headed to Christe’s auction house. Alexandra Olsman, a junior specialist in Antiquities, gave the team of rundown of what it’s like to work for one of the largest auction houses in the world. The students were surprised to find that they would be able to walk into the Antiquities storage to see some of the prized collection! Afterwards, the team exited Christie’s (clutching their bags just tight enough to avoid knocking over any historic pieces) and concluded their final professional development trip of the week!

Although the MSLCE students were sad to go, they took in their last bits of shopping, sight-seeing, and Broadway before heading to the airport on Friday morning. While waiting for their plane, the cohort reflected on their amazing time made possible by Mandi Glowen, Kate Lawson, and the rest of the MS in Leadership in Creative Enterprises staff. It was truly a once-in-a-lifetime experience.