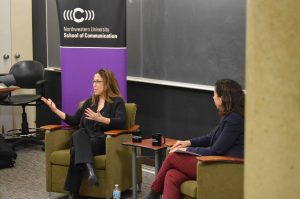 Ever since she began her new job as the managing director of Victory Gardens, Erica Daniels has gotten used to using the word “scrappy.”

That’s partly because of Victory Gardens’ size: the theatre company has a small staff of people who wear different hats, and getting things done involves first figuring out “how.” But it’s also because of the way the company compares to where Daniels’ has worked before, at theatre giants like Steppenwolf, where she worked as the artistic director, and Second City, where she worked as the president of theatricals.

“It’s not this shiny, set in stone place,” Daniels said of Victory Gardens. “It’s this place where it’s like, ‘Okay, that’s not working? Scrap it and move on.’ It’s really nimble.”

Daniels described her new job and the path that got her to it during last Thursday’s first speaker series event of the quarter. A graduate of Northwestern’s performance studies program, Daniels originally planned to pursue acting. Then an accident on campus left her with a broken foot and a new professional dream — to work behind the scenes.

… It’s worth noting, however, that  this dream came together after a brief stint pursuing a career in the FBI.

“It was a very poor choice — I’ve made poor choices! I can own up to that,” Daniels said with a laugh, “I went to Quantico, did not successfully graduate from Quantico, and that’s my story… and I can never have a job in law enforcement again.”

Throughout the speaker series event, Daniels discussed her motivations for pursuing new opportunities. For instance, she said that she felt compelled to find a new position when she realized improv comedy did not excite her as much as theatre.

“I like creating really good work, so for me, I need to work in a place where I do believe in the work,” she said. “I was just less excited by Second City once I was there… I’m just not going to throw myself on the gauntlet for improv, that’s just not my thing.”

She also discussed the differences between the creative communities in Chicago and New York. In Chicago, “people are very supportive of each other.”

“People really do believe that there’s work for everybody in this city,” she said. Then she paused and added with a smile, “which is not true, but it’s a rare mentality.”