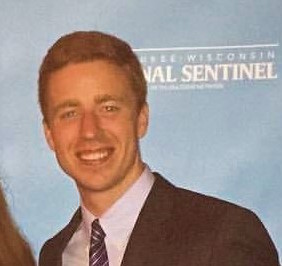 Though a countless number of people have attended world renowned film festivals like Sundance and Cannes, few can say they’ve been there for college credit.

Chip Potter is one of them. The MSLCE student went to Sundance in 2013 for school credit while studying at DePauw University in Indiana.

“I met these people who are so passionate about what they did,” Potter said, referring to the filmmakers that were there representing their movies. What’s more, he saw some of these people get their films sold, which was a thrilling experience. Potter said it was witnessing the “realization of this dream.”

“It was kind of an eye opening experience for me to see,” he said, “To see people so invested in what they’re doing and having it work out.”

Potter has always been a film buff. He grew up watching movies as part of a family with a special regard for performance: an aunt who “followed her dream to Broadway,” a dad who acted in musicals in high school, and three sisters who were all into musical theatre growing up.

“My favorite feeling in the world is sitting in a movie theater and having the lights go down and the screen come up,” Potter said.

Despite his obvious passion for film, he didn’t jump into it professionally right away. After graduating, he worked at a media marketing firm, a job he liked but that failed to fill his passion for the creative.

So he decided to make a change. He went to film school at Tribeca Flashpoint in Chicago, and then decided to pivot towards a profession within film that focused more on the business end. That’s when he stumbled onto the MSLCE program.

“I sat in on a speaker event,” Potter said, and then realized, “Okay, this is perfect.”

Potter would like to get into film distribution, though he’s open to working in television, especially considering the success of digital content producers like Netflix and Hulu. His end goal, ideally, is “to manage the creative types I like working with so much.”