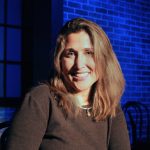 All of this began with a degree in Performance Studies from Northwestern, where she’ll be returning on Jan. 12 for our first speaker series event of winter quarter. In a recent interview, she said that a desire to learn pushed her to change roles from one job to the next. (Register here)

“I took what I had learned at each place and then tried to take that to the next job and keep growing,” Daniels explained, “when I felt like I had gotten as much out of a place as I could get in terms of learning.”

In addition to wanting to keep learning, Daniels also considers herself “the person who explores things when the opportunity comes up.”

“When Steppenwolf was looking for this person, it never dawned on me not to explore it,” she said. “That’s sort of my personality.”

Before her career behind the scenes began, Daniels originally thought she would be a performer. Then she broke her foot, and everything changed.

“I was working in the Allen Center two weeks after graduation, and I opened up a beer cooler and it had been packed improperly and every case fell on me and I fell backwards covered in beer cases,” Daniels said with a laugh. “I got an internship in casting so I wasn’t sitting at home… it was immediately clear to me how much more comfortable and better I was on the administration side of the table than actual acting.”

Her advice for aspiring creatives?  Don’t be afraid to explore every opportunity.

“I think I’ve been very lucky in my career,” Daniels said, “but I wasn’t afraid to walk through the door, and I think that’s the really big thing.”